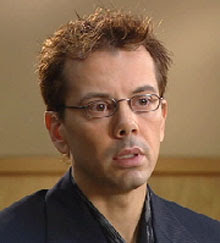 A man described by police as one of Canada's most sophisticated criminal masterminds has been formally released from prison — but with some conditions on his freedom.

Gerald Blanchard was formally released in British Columbia April 23, according to Parole Board of Canada documents obtained by CBC News under an access to information request.

Blanchard, from Manitoba, once was the linchpin behind an international fraud and theft ring that stole millions from banks and financial institutions.

Facing more than 40 charges when police caught up with him in 2007, he pleaded guilty to 16 of those charges in a Winnipeg court and handed six years in prison.

The case grabbed international headlines as it involved global heists and Interpol warrants. Several capers were carried out in collaboration with a mysterious figure known as "The Boss." Blanchard lived a jet-set lifestyle under several assumed identities, using elaborate disguises and high-tech surveillance equipment to empty cash machines from banks around the world.

In one audacious theft, he posed as a tourist in a Vienna castle before swiping the priceless Star of the Empress Sisi from an encased display — leaving a gift-shop replica in its place.

The 19th-century diamond-and-pearl heirloom was later found stashed at the home of one of Blanchard's relatives in Winnipeg.

Blanchard had his parole revoked in 2010 after being involved in "possible fraudulent activities" according to his parole report. The parole board again granted Blanchard day parole last October and continued day parole up to April 23, his statutory release date. To maintain parole, Blanchard cannot own a computer or more than one mobile phone.

The board said it does not consider Blanchard an undue threat to re-offend.

Blanchard said at that time he was considering a new career as a security consultant.

Leader of international theft ring back on day parole

A man behind a sophisticated international theft ring who is the subject of an upcoming movie is back on day parole.

Gerald Blanchard was convicted in 2007 for the theft of hundreds of thousands of dollars from banks in Winnipeg and around the world.

He also stole a rare diamond once owned by royalty from an Austrian museum.

His day parole was previously suspended back in July 2010 for concerns over "selective adherence to rules," said parole board officials in a decision.

The parole board says it is not happy about a movie project being developed about his crimes, but believes he is considered unlikely to reoffend.

In a decision issued late in April 2012, the board said Blanchard had "long term positive plans."

His parole comes with conditions including limited access to computers and cellphones.

The board also said he must disclose his financial situation to his parole supervisor.

Gerald Daniel Blanchard even negotiated lesser sentences for his Crew members and an immunity from prosecution for at least one member of the crew.

Therefore the 6 years jail sentence imposed on Gerald Daniel Blanchard was him taking the jail-time so his crew members could receive lesser sentences.

Normally a Godfather would walk free whilst his crew members serve jail sentences, not Gerald Daniel Blanchard, he took the wrap, served the time and now should be afforded the the benefit of the doubt with regards his rehabilitation.

Good luck in the future and lets hope to see the exploits of "The Blanchard Gang" only on the silver screen and via a much anticipated computer game.
Posted by Art Hostage at 12:59 pm

He is who he is. He always will be. He can't help this. I know this. This is not who he was meant to be. He wa once a beautiful child full of potential before the male adults in his life got a hold of him. So sad.

This guy is a legend. He's done so many incredible things it blows my mind. He lived an amazing life that I could only dream about living, although I kind of doubt I ever will, obviously. I remember reading an article about him (I kind of have an obsession with the art of professional thievery, which was the only way I found the article in the first place) and I just couldn't stop reading without thinking how amazing his life is.

I know him personally and it wasn't about the money so much as the challenge. Inside he is a beautiful person who wouldn't hurt a fly. If he reads this I would love to have him over for dinner. Still stuck in Omaha in surburbaville. If your reading this Danny it's steffanie!

I KNO HIM IN PERSON WE SHARED THE SAME CELL IN REMAND CENTER THEN I TOOK HIM TO 6A ( HELLS ANGELS FLOOR) WHERE HE WAS SAFE NO BODY TOUCHED HIM HE IS A VERY NICE GUY I WISH HIM ALL THE BEST IN FUTURE ITS H.D. IF YOU READ THIS YOU WILL KNOW WHO I AM TAKE CARE BUDDY