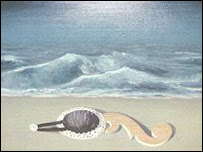 A painting by Rene Magritte valued at £350,000 and stolen last year from a south London storeroom has been recovered.
A member of the public contacted the Art & Antiques Unit of the Metropolitan Police on Thursday to say he thought he had found the painting.

The 1927 picture Les Reflets du Temps had been reported missing from storage in August 2006.

The man had checked the painting against the London Stolen Art Database.

The picture, which features a surrealist scene of a beach, sea and hat, is being kept by the Art & Antiques Unit while they investigate its disappearance, and will be returned to its owner, police said.

Det Supt Vernon Rapley, head of the unit, said: "For anyone considering buying art, antiquities or cultural property the database is an invaluable resource to help buyers check that they aren't being sold stolen items.

"I am really pleased that the database has enabled this Magritte to be found so that the victim can have it returned to them."

The Art & Antiques Unit stores details and images of some 58,000 pieces of stolen art.

Rene Magritte, who died in 1967, was one of the best known artists of the 20th Century, creating dream-like surreal images which have become iconic.

Born in Belgium in 1898, Magritte became a leading members of the surrealist art community in Paris in the 1920s. 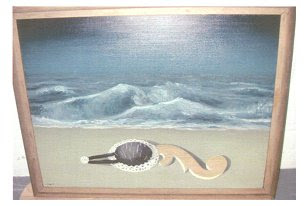 The Met has recovered of a Rene Magritte painting worth £350,000 which had been reported stolen from London in 2006.

A private individual contacted the Art and Antiques Unit on 21 June to say that he believed that he had found the missing 1927 Les Reflets du Temps picture, an oil on canvas depicting a surrealist scene of a beach, sea and hat.

The man had checked the painting against the Met's London Stolen Art Database and had found it featured there. The painting's owner reported it missing In August 2006 from where it was being stored in South London.
The painting is currently with the Art and Antiques Unit whilst they investigate the circumstances surrounding its return, but will be returned to its owner in due course.

The database is run by the Met's Art and Antiques Unit and stores details and images of over 58,000 items of art, antiques and cultural property that has been reported stolen. A selection of these are publicised on the MPS website:
Detective Sergeant Vernon Rapley, below, head of the Art and Antiques Unit, said:
"For anyone considering buying art, antiquities or cultural property the database is an invaluable resource to help buyers check that they aren't being sold stolen items. 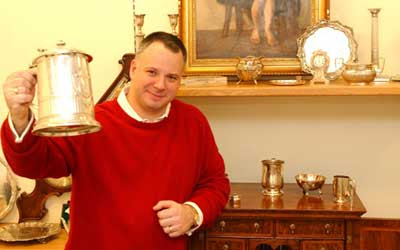 "I am really pleased that the database has enabled this Magritte to be found so that the victim can have it returned to them."
Vernon Rapley went on to ask:
"Can I go back to sleep now and wait for my pension?"

So, we are supposed to believe that a member of the public just stumbled on this stolen £350,000 painting???

Or, they were offered this painting and duly checked the Met Police stolen art database????

More likely, the handler of this stolen painting has used a "patsy" with a clean record to try and collect a reward for handing this painting back.

Detective Sgt Vernon "the book keeper" Rapley, (who can only dream of being a Superintendent, although as the British Police are regarded as the Cream of British Society, White Thick and Rise to the top, it would be only fitting for Vernon Rapley to reach the rank of Commander), has always said that no money will be paid if there are no arrests and convictions.

I am going to do some checking to get to the bottom of this "too good to be true" stoke of luck.

If this member of the public was offered this painting and then, finding out it was stolen, handed it to Police, then they will still be liable for the asking price from the criminals.

In this event, I hope the member of the public has a hard hat, because he will need one.

The word from the Underworld will be:

"You handed back the Magritte, Fuck you, pay me"

"You did not get any reward, Fuck you, pay me"
Time will tell if this is a truly lucky recovery, or if the member of the Public has bitten off more than he can chew !!

What ever happened to "Police recover stolen art by doing their job" or is that just a mere Pipe Dream???