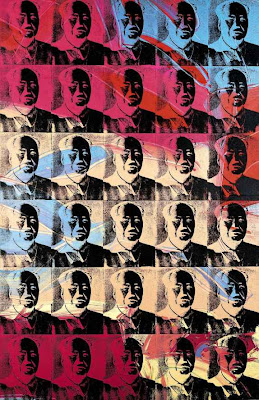 
A picture by Andy Warhol that had been missing for 27 years after being stolen has sold for £1.25 million at auction, Sotheby's said.
The 30 Coloured Maos (Reversal Series) silkscreen went under the hammer as part of the auction house's Evening Sale of Contemporary Art in London yesterday, which included works by Damien Hirst, Banksy, Francis Bacon and Bridget Riley.

The Warhol was stolen in 1980 while on exhibition in Paris, and its whereabouts remained unknown for almost three decades.

The acrylic silkscreen and ink on canvas picture was recovered earlier this year by the Art Loss Register after it was brought into Sotheby's in London for valuation in November 2006.

The specialist who received the work noted gaps in the work's provenance and contacted the ALR - the world's largest private international database of lost and stolen art - who tracked the history of the missing picture.

The work was sold on Thursday by the ALR on behalf of insurers.

"We are thrilled to have played a part in bringing to light this long lost work and we were delighted to see it sell so successfully at Sotheby's last night."

The 30 Coloured Maos is one of six works by Warhol sold in the auction at Sotheby's which together fetched a total of £4,432,000 including premiums.

The rare masterpiece from Warhol's Reversals series was commissioned by Brun Bischofberger for an exhibition at his gallery in Zurich in 1980. It revisits the images of Chinese Communist leader Mao Tse Tung painted by Warhol in the early 1970s. 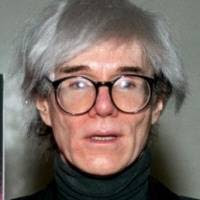 This must have been sold very cheap in the underworld and been in the possession of a naive fool. http://arthostage.blogspot.com/2007/06/museum-quality-stolen-art-costs-shirt.html

A quick check with the art loss register would have told the stolen art handler it was listed.

To have covered their back, they would have got a digital reproduction print made up and if the Police came calling the reproduction could have been shown and proved incorrect, not the original.

Thereby the the original is retained by the handler with the knowledge it cannot be sold on the open market.

It is then a less trade-able item and could be given back in some sort of deal for lesser jail time if the need arose.

To be frankly honest, it is not Police recovering stolen art, it is the thieves and handlers making mistakes.

As these are far and few between in the bigger stolen art picture, then we can only expect the odd moron getting caught with stolen art, and the recovery rate sticking at around 5%, even less on high value stolen art.

Julian Radcliffe must be smiling with his 15% of the proceeds, not a bad days work, a couple of hundred thousand pounds sterling.
Julian Radcliffe apparently has an O.B.E. this is due to his benefiting from Other Buggers Efforts in stolen Art Recovery.
If a Weasel featured little turd like the slimy Julian Radcliffe can receive an O.B.E. then there is hope for the rest of us.
Posted by Art Hostage at 9:15 pm