Pearl Buck getting her Nobel Prize

Who's that with Pearl Buck, its JFK looking dapour, rumour has it JFK could read 1200 words a minute, that's some going !! 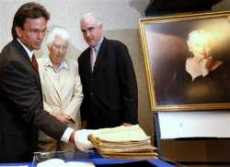 PHILADELPHIA (Reuters) - A long-lost manuscript of the 1932 Pulitzer Prize-winning novel "The Good Earth" by Pearl S. Buck has been recovered, federal officials said on Wednesday.

The 400-page, typewritten manuscript of the novel, widely regarded as an American classic, was given to the Freeman auction house in Philadelphia by the daughter of Buck's now-deceased secretary to establish its authenticity, said Patrick Meehan, U.S. Attorney for the Eastern District of Pennsylvania.

It was then given to the FBI because it was apparently stolen.

"These may very well have been inappropriately obtained," said Meehan at a news conference. He added that no criminal charges would be filed. The identity of the woman who may have taken the document to the auction house was not revealed.

Buck, who wrote some 70 novels and died in 1973, drew on her experiences living in China to write "The Good Earth," describing the life of a Chinese family at a time when the country was a mystery to most Americans.

The book won the Pulitzer Prize in 1932 and helped Buck win the Nobel Prize for literature in 1938.

The writer wrote in a 1966 book that "The Good Earth" manuscript had gone missing.

It was delivered to the auction house in a red box adorned with Chinese designs. The box was inside a small suitcase that also contained letters to Buck from famous contemporaries including Eleanor Roosevelt and President Harry Truman.

With the exception of the front page, which is yellowed and slightly torn at the edges, the document is in "excellent" condition, said Robert Wittman, senior investigator in the FBI's art crime team brought in to assess the document.

Wittman said it was hard to place a value on the document but it would likely fetch at least $150,000 if it was sold at auction.

The document will soon be subject to negotiations between the Connecticut-based Pearl S. Buck Family Trust and Pearl S. Buck International, an organization near Doylestown, Pennsylvania, that is dedicated to commemorating the writer's work.

Her daughter Janice Walsh said at the news conference she had for years used the typewriter on which her mother had written the book, and that recently was used to authenticate the document.
Art Hostage comments:
As one American Iconic Treasure is recovered, America is about to lose another.
Senior FBI Agent Robert Wittman, spiritual leader of the FBI Art Crime Team is reputed to be retiring this coming October.
By using the title Senior investigator, FBI top brass are preparing the public for the shock of losing its finest, honest, decent, straight as a gun barrel FBI Agent extraordinaire.
How about a "Stop Bob Wittman Retiring" campaign ?
Upon another note, as I was reading some research material about Pearl Buck I wondered about another genius Buck, no not Arthur Buck played by Dudley Moore, that of Uncle Buck, John Candy to be specific. 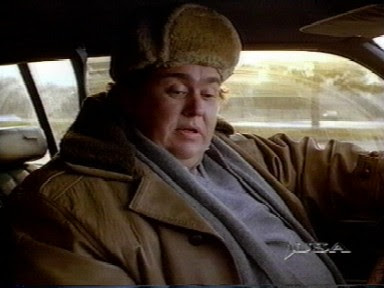 I must say that even after all these years the loss of John Candy was such a blow.
I have not met anyone who had anything other than good thoughts about this comedy genius.
I finish with a smile on my face recalling hours of wonderful pleasure Pearl Buck and Uncle Buck, John Candy, gave to the world. 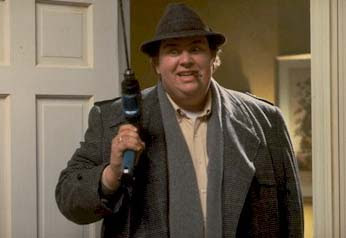