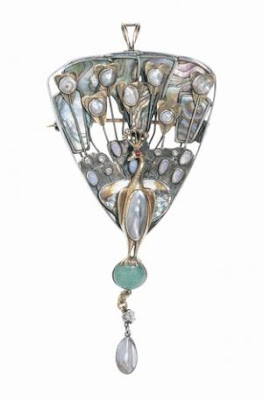 STAFF at Court Barn Museum in Chipping Campden have been left devastated after silver and jewellery worth more than £200,000 was stolen on Monday night.

Silver items designed and made between 1902 and 1908 by designer CR Ashbee and craftsmen Hart Silversmiths were taken from three cabinets after intruders forced their way in between 11.30pm and 11.40pm.

One of the items taken was a silver and gold pendant brooch inlaid with jewels in the shape of a peacock which was made by Ashbee at his guild in Campden.

Museum curator Sarah Mccormick Healy said: “We are devastated. You put in so much for the general public to enjoy. It’s just heart-breaking to see.

“[The pendant] was such a beautiful piece of jewellery.

It’s a key item for us. Quite a few of our key items have been stolen. They were individual pieces designed and made by hand.

They are significant in a local way because they were made here but also have a national importance.

It has taken away enjoyment from a lot of people who love the museum.”

She added: “We have to close until we can make it secure. There’s a lot of glass around.”

CR Ashbee was a prime mover in the Arts and Crafts movement which started in 1860. He moved his guild to Chipping Campden in 1902. Police spokesman Alexa Collicott said: “The burglary on Church Street happened between 11.30pm and 11.40pm on Monday, November 14.

“Officers are particularly eager to hear from anyone who was in the area around the time of the burglary who might have seen a silver Mitsubishi L200.

“A car matching this description was stolen from the driveway of a home on the High Street in Chipping Campden overnight between Monday, November 14, and Tuesday, November 15, and officers believe its theft might be connected to the burglary on Church Street.”

If you have any information about the burglary, contact Gloucestershire Police on 101 quoting incident number 483 of November 14.