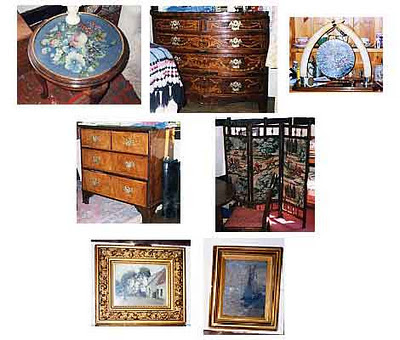 Armed police found more than they bargained for when they raided a supposed drug den in Calne – a bumper hoard of motorcycles and antiques which police believe have been stolen.

Police attended an address in Anchor Road on Friday after a tip-off from residents that cannabis was being cultivated inside. When the occupants refused to answer, police smashed through the door and found two men inside.

They found what appeared to be drug cultivation taking place inside a cupboard, a significant amount of material believed to be cannabis being dried, and suspected class A drugs.

They said they also found the house ‘packed’ with pushbikes and motorcycle parts, as well as antiques.

Two men were arrested on suspicion of drug possession and theft and have been released on police bail.

Sergeant Phil Connor, of Calne Police, said: “Police executed a warrant under the Misuse of Drugs Act. Officers from Wiltshire Police’s crime team, along with firearms officers and a police dog, attended, but the residents refused to answer so the door was forced.

“It appears cultivation had been taking place inside a cupboard and we also located what we believe to be class A drugs. Police have seized a substantial amount of property believed to be stolen and inquiries are ongoing.”

A hoard of antiques believed to have been stolen from Shropshire homes has been found at a property in Shrewsbury.

A police search discovered items such as an Indian sword, a set of silver butter knives, and a suitcase full of 78 records.

Det Sgt Chris Hughes said the items could have been stolen from anywhere in Shropshire, but most likely from the Shrewsbury area in recent weeks.

A 19-year-old man was arrested on Thursday and later released on bail.

Mr Hughes, from the burglary unit at West Mercia Police, said: "Some of the items are quite valuable and I imagine would be of sentimental value. I am hoping the rightful owners will come forward."

Police are continuing to investigate the burglaries.

A NUMBER of antiques, thought to be worth £1,500, have been stolen from a vehicle in Redditch The items were in the boot of the silver Daewoo Tacuma, which was broken into in Cyprus Avenue, Astwood Bank, between 10pm on Monday, November 21 and 7.30am on Tuesday, November 22.

Taken was a Beswick Highland bull figure, two Suzie Cooper coffee sets - one from the late 1930s and the other from the 1960s, four plates, a Crown Devon figure of a little girl in green which dated from the 19th century, a large Victorian hand painted lamp and other items.

The items were wrapped in bubble wrap and were in plastic and cardboard boxes.

The owners had been planning to auction them to raise money to buy Christmas presents and only realised they had been stolen when they went to have them valued and found the boot empty.

A NUMBER of items were stolen from an antiques shop in Chipping Campden at the weekend.

Stuart House Antiques on the High Street was broken into at about 3.15am on Sunday and numerous pieces of antique crockery were damaged.

Thieves made off with items worth up to £3,000, including silver-plated cutlery, toast racks, fish slices and cruet sets.

Police believe offenders reversed a vehicle into the doors of the premises, forcing them open before leaving the scene in a vehicle towards Stratford.

A BURGLAR who made a night-time raid on the home of a Kidderminster antique dealer has been jailed for 27 months at Worcester Crown Court.

Martin Gwynne also broke into a Bromsgrove house and was eventually arrested after being seen on the roof of a school.

Gwynne, 39, of Oak Road, Catshill, Bromsgrove, who pleaded guilty, was said to have problems with heroin.

Police were alerted next day by a report that Gwynne was trying to sell the stolen items at an antiques centre in Kidderminster and had also gone to Cash Converters. All the stolen objectsd had been recovered.

Earlier that month, the home of Dennis Williams in Golden Cross Lane, Bromsgrove, was burgled and a 20 dollar Canadian bill was taken. This was later found in Gwynne's possession and he admitted handling the stolen note.

In August, Gwynne was spotted on the roof of Meadows First School in Bromsgrove by the caretaker. He was arrested by police and claimed he had only gone on the roof out of curiosity but he later admitted that he had entered five classrooms intending to steal metal cable.

His previous convictions included drug use and shoplifting.

Jason Aris, defending, said Gwynne had immediately confessed and had already spent 105 days in custody, which could be knocked off his sentence.

This was confirmed by Judge Patrick Thomas QC, who said he was surprised by the stoicism of William Arris, who had professed annoyance rather than distress in his victim impact statement.