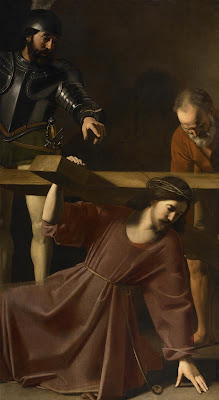 France laid claim on Monday to a French baroque painting that it said was stolen 200 years ago, and barred a London gallery that brought the work to Paris for an exhibition from taking it back.

France's culture ministry said the picture, "The Carrying of the Cross" painted by Nicolas Tournier around 1632, had been stolen from a museum in the southern city of Toulouse in 1818 and still belonged to the French state.

London's Weiss Gallery had brought the painting to the French capital for Paris Tableau, a small art fair devoted to Old Masters.

"This was a property of the French state that was deposited at the Augustins Museum in Toulouse and was stolen in 1818. It is a non-transferable work," the ministry said in a statement.

"We are claiming this painting as a property of the state and it will not leave the country," the ministry said, adding that it had informed the gallery of its decision at the weekend.

At the opening of the fair on Monday, the monumental painting of Christ carrying the cross, which measures 2.2 metres by 1.21 metres (7.2 feet by 3.96 feet) was on diplay at the Weiss Gallery's stand.

A company representative refused to comment on the ministry statement when asked by AFP.

A note at the stand said the painting had come from the Augustins Museum, that it had been sold by Sotheby's in Italy and later at the Maastricht art fair.

The painting turned up in 2009 in Italy during the sale of an estate of a wealthy Florence art collector and was later identified by French gallery Didier Aaron & Cie, art merchant Herve Aaron told AFP.

This is the second painting depicting "Christ Carrying of the Cross" to be seized recently, spooky !!