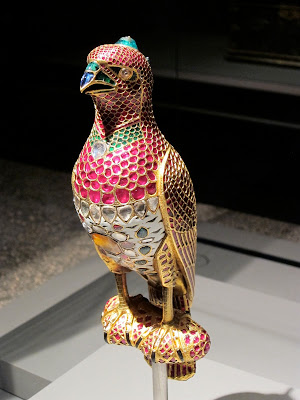 On the night of 19 November, a gold falcon was stolen from the Musée du président Jacques Chirac. The museum located in the village of Sarran in Corrèze, exhibits gifts offered to the former French president Jacques Chirac, when he was in office. The museum collection includes approximately 5,000 gifts that the former president received during his diplomatic trips, as well as official foreign politics and ambassador visits in France.

The stolen work of art was a gift from the Saudi Arabian government. It is the first theft that occurred in the museum since its opening in 2000 and authorities say it was probably committed by professionals. It is believed that the thieves forced their way into the museum, by breaking the lock of the door, and got out in less than two minutes. Only the yellow gold falcon, estimated at €152,000, was taken which is not the most expensive piece of the museum collection, but it was certainly the most flashy. It is decorated with 1,400 precious jewels (ruby, sapphire, etc.), but mostly diamonds.