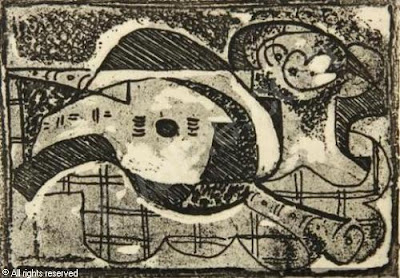 Prague. One of the Czech Republic’s most famed Cubist painters is dominating the country’s headlines this week. Emil Filla, a leader in Prague’s avant-garde and an early Cubist painter, has been at the centre of three separate stories, including a theft of his works and a record setting auction .

First, on Friday 18 November, four of Filla’s works were stolen in the early morning hours from the Peruc Chateau, located about 50 km northwest of Prague, which houses a permanent exhibition of Filla’s works and where the artist spent several years after the second world war. According to Alica Stefancikova, the exhibition’s curator, the alarm system, which is directly connected to the Peruc police station, sounded at 4:04am on Friday morning. Although police arrived at the chateau within ten minutes, the thieves had already fled the scene.

The four oil paintings, all from the 1940s with the exception of one earlier painting, are estimated to be worth 50m to 80m Czech crowns, and the paintings are uninsured. “We preferred to invest in the preventative protection of the collections,” Stefancikova told The Art Newspaper after the theft. Besides an attempt to steal the works in 1992, when the perpetrator was arrested, no other attempts have been documented. The stolen works include Still Life With a Fruit Basket and Clarinet (Zatisi s klarinetem a kosikem ovoce), 1948, Woman with Picture Cards (Zena s kartami), 1946, Still Life with a fruit bowl (Zatisi s misami ovoce), 1946, and Blind man (Slepec), 1926.

According to reports in the Czech press, several frames were discovered in the nearby village of Bysen on Sunday 20 November. Whether they belong to the missing paintings is yet to be determined, according to Stefancikova.

At the same time, one of Filla’s works set a record on 20 November as one of the top 20 most expensive paintings ever sold at auction on the domestic scene. Dating from 1911, Filla’s Comforter (Utesitel) went for 11m crowns, almost double the starting price, at a sale held by Galerie Art Praha at the Hilton Hotel in Prague. Last year, Filla’s Still Life with a Bottle of Cherry (Zatisi s lahvi Cherry), 1914, sold for 16.25m crowns, ranking it as the highest-priced Filla work sold at a domestic auction. His Sculptress in the Studio (Socharka v ateleru) was among several Czech avant-garde works that brought Sotheby’s in London more than £11m, double the estimate, at an auction in June of this year.

Finally, on Tuesday 22 November, Filla’s 1913 canvas Two Women (along with The Dancer, a painting by Vincenc Benes and a bronze statue by Otto Gutfreund) was returned to the Czech Republic after having been seized while on loan in Vienna this past May as a result of a multi-billion crown claim against the state by a blood plasma firm. An Austrian appeals court refused to recognise the claim. Although the Filla painting has been returned to the Moravian Gallery in Brno (and the two other works to the National Gallery in Prague), Diag Human, the blood plasma firm who is behind the almost 20-year-long arbitration dispute, may challenge the final verdict according to a report on Cesky Rozhlas (Czech Radio).

As a result of the claims made by Diag Human, the Czech Ministry of Culture issued a ban on the loaning of art and cultural artefacts to international exhibitions this spring. Beyond a loss to the public sector of 1.2m crowns in six months, according to the Czech Radio report, the Czech Republic will be unable to participate in 58 international exhibitions in London, Paris and Houston, among other cities, which were slated to receive more than 1,000 works as loans this year and in 2012.