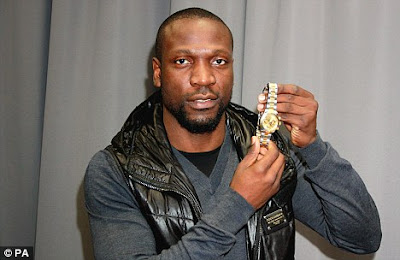 Former Arsenal footballer Lauren has been reunited with his Rolex Daytona watch, which was stolen from him six years ago.

In July, the Met recovered more than 400 items worth a total of more than £500,000 in searches of addresses in Essex and east London.

The 34-year-old footballer's watch was among the items found.

Lauren, who played for Arsenal between 2000 and 2007, said he was "really pleased" to have his Rolex back.

Police believe the watches recovered were stolen during armed robberies on jewellers and in household burglaries and thefts across south-east England between 1994 and 2010.

During the raids in July, police found other jewellery, silverware and antiques.

Many of the wrist and pocket watches found are highly collectable.

Police realised one of them recovered belonged to the retired Premier League player when inquiries with Rolex revealed information about how his watch was stolen.

With the help of Arsenal FC, officers were able to trace the former player to reunite him with his property.

Det Sgt Richard George, of the Tower Hamlets Crime Squad, said: "We are delighted to be able to reunite Lauren with his watch.

"We are utilising every tool available to us to identify as many victims as possible."

The Met has set up an online Flickr page to show the watches in the hope that owners will come forward to identify them.