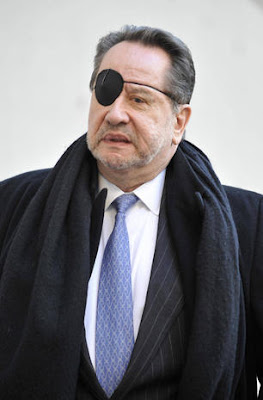 Barry H. Landau admits to stealing thousands of historic papers from museums from Maryland to Vermont

Barry H. Landau, the once-esteemed collector of presidential memorabilia, admitted in federal court Tuesday that he stole thousands of documents regarded as cultural treasures from historical societies and libraries in Baltimore and up the East Coast.

The 63-year-old's guilty plea, to two criminal counts involving theft of artwork, revealed a scheme in which prosecutors said he compiled lists of items to steal by matching names of historical figures, from poets to president, to their "potential monetary value."

In a signed agreement with prosecutors, Landau — who boasted one of the largest collections of Oval Office artifacts, and whose social circle included Hollywood elite and American presidents — admitted to being motivated not by his enthusiasm for artifacts, but by greed.

Prosecutors said the value of the stolen documents easily exceeded $1 million. One of 60 documents stolen from the Maryland Historical Society was an 1861 land grant signed by Abraham Lincoln to a former member of the Maryland militia who served in the War of 1812. It's worth $100,000, prosecutors said.

The oldest pilfered document was penned 533 years ago by Lorenzo de Medici during the Italian Renaissance. Among the most revered were three inaugural addresses delivered by Franklin D. Roosevelt, with the president's handwritten notes and corrections.

Neither Landau nor his attorney, Andrew C. White, addressed reporters outside the U.S. District Court in Baltimore. Landau arrived wearing a long black overcoat, using a cane and with a black patch covering his right eye. He told the judge he was taking prescription medicine to help him sleep, along with Lipitor and the anti-depressant Prozac.

Several employees of the Maryland Historical Society — where Landau's scheme unraveled in mid-2011 — watched the hearing. Ashley Harper, a digital collections assistant at the Historical Society of Pennsylvania, stood outside the courthouse holding a sign: "You can't steal history."

Harper said she met Landau at least a half-dozen times and pulled boxes of documents for him. Among the items taken from the Pennsylvania archives, prosecutors said, was a 1788 handwritten proclamation by John Hancock regarding the Commonwealth of Massachusetts.

"It's pretty sad when things precious to a nation can be stolen," Harper said. "It was like hearing about the loss of a loved one."

Prosecutors and Landau's attorneys did not agree on a sentence, which will include paying restitution. His 24-year-old assistant, Jason James Savedoff, pleaded guilty to theft conspiracy in October and faces up to 15 years in prison. His sentencing was postponed in January; a new date has not been set.

Authorities said Landau used various means to distract librarians and staffers in four states, sometimes by offering cupcakes, but also by using aliases. He and his assistant concealed documents in secret pockets sewn into jackets, sandpapered off identifying markers and stole listings from card catalogs to make tracing the purloined papers more difficult.

The FBI found 10,000 papers and "objects of cultural heritage" during searches of Landau's apartment on West 57th Street in midtown Manhattan. Court documents say investigators traced 4,000 of the items "as being stolen from libraries and repositories throughout the United States."

Federal prosecutors have described the scope of the thefts as "truly breathtaking," with stolen documents that include an endorsement for a judge signed by George Washington, a letter written in French from Marie Antoinette, and an 1874 note from Karl Marx inquiring about the price of a book bearing his signature.

Some of the most significant thefts occurred in December 2010 from the Franklin D. Roosevelt Presidential Library and Museum in Hyde Park, N.Y., which is affiliated with the National Archives in Washington.

There, prosecutors said, Landau and Savedoff took seven "reading copies" — from which live speeches were read — of addresses given by Franklin D. Roosevelt, including those at his inaugurations in 1937, 1941 and 1945.

The 1945 address is a five-page document with a purple ribbon securing the pages through one of four hole punches. The document has Roosevelt's notes throughout, prosecutors said, and includes his signature and a scrawl from the president on the final page: "orig reading copy."

"These items are extremely valuable, and would be sold individually for sums well in excess of $100,000," federal prosecutors wrote in the plea agreement. "From a historical perspective, these reading copies of the inaugural addresses are priceless."

Among the most valuable documents stolen was a letter written in 1780 from Benjamin Franklin to naval hero John Paul Jones about gunpowder deliveries from the French. It is worth several hundred thousand dollars, according to prosecutors.

Landau and Savedoff were arrested July 9 at the Maryland Historical Society in Mount Vernon.

A part-time library staffer, David Angerhofer, was on alert because of the men's strange behavior. He sneaked onto a balcony in the reading room for a better vantage point and said he spotted Savedoff concealing a document under his own papers.

"They were too schmoozy to be regular people," Angerhofer said Tuesday, as society officials made their first extended comments about the theft.

Angerhofer said Landau and Savedoff arrived shortly after the library opened about 10:30 a.m. on a Saturday, and brought the staff cookies. Landau introduced Savedoff as his nephew. Though the library was busy in the morning, Angerhofer sensed something was amiss and decided to watch them "like a hawk."

He said Landau approached the circulation desk several times during the morning, acting as a "human screen" to block the two staffers' view of Savedoff. Angerhofer said he sent a colleague an email, acknowledging the odd behavior.

When Savedoff and Landau left for a lunch break, the library staffers dedicated themselves to getting "visual confirmation" of theft, Angerhofer said.

Angerhofer, who tried to stay out of view for much of the afternoon, said he watched from a balcony shortly before 4 p.m. as Savedoff slipped a society document under his own papers. The account is backed up in a police report.

"They acted very cool," Angerhofer said, describing their demeanor after he confronted them.

Pat Anderson, the society's director of publications and library services, said the staff does not believe any documents are missing, and there was no noticeable damage to the items Landau and Savedoff hid. None of the items ever left the building, she said.

Police said they seized 79 stolen documents — 60 taken from the society — hidden in a computer bag in a small coin locker in the reading room, to which Savedoff had the key.

On Tuesday, officials also showed two display cases with some of the presidential "ephemera" — dance cards from inaugural balls, admission tickets for the impeachment proceedings of President Andrew Johnson — that they said the two tried to carry out of the library.

The society is looking for funding to install security cameras in the reading room and has begun searching visitors' personal papers as they exit, Anderson said.

The investigation quickly expanded beyond Baltimore, as curators across the nation scoured their collections and reviewed visitor logs. More thefts were discovered, and librarians recalled the two men as suspicious because of their vague and shifting requests, unrelated to the topics they said they were researching.

New court documents filed Tuesday reveal an intricate scheme in which Landau and Savedoff carefully studied which documents they wanted — a determination usually based on worth rather than substance or relevance to a particular line of study.

Landau hit archives up and down the East Coast, according to the plea agreement, from the New York, Pennsylvania and Connecticut historical societies, to the University of Vermont and the Roosevelt library.

Items seized from his apartment have been turned over to the National Archives, where employees have been cataloging them and trying to track down owners. Although authorities recovered the three Roosevelt inaugural addresses from Landau's apartment, court documents say four other original Roosevelt documents were sold to a collector for $35,000.

Paul Brachfeld, the National Archives' inspector general, said in an email last week that after Landau and Savedoff are sentenced, he envisioned an unusual procedure for determining the ownership of "those items for which clear and legal provenance cannot be defined." He described it as "a reverse 'Antiques Roadshow' where the public could come to view the holdings and 'claim' [them] if they have the legal basis to do so."

Assistant U.S. Attorney James G. Warwick said in court on Tuesday that many vendors who bought items from Landau have returned them to the government, and that as part of his plea, Landau is to pay them back.

Prosecutors have said in court that they believe the document thefts have gone on for years, but the charges to which Landau pleaded guilty to are limited to the past two years. Landau's defense attorney disputes one contention by authorities, that Landau ordered Savedoff to steal documents.

The plea agreement says that the men sometimes visited historical societies dozens of times, "and used various methods" to steal the documents. That included secret pockets in sports coats and jackets, "as well as distracting museum curators to disguise their true intentions."

With a document in hand, federal prosecutors said, they removed inventory markings "by applying sandpaper and other abrasive materials to the document," a process they called "performing surgery." They used checklists to keep track of author and date, which collection it had come from, and whether a document had been scanned onto microfilm.

The prosecutors said Landau often avoided taking documents that had been put on microfilm because "of the increased possibility the theft … would be discovered by the library or repository."

Landau spent years building a public persona built around his collections, and was profiled by the Associated Press after he wrote a coffee table book on White House cuisine. The story described his apartment near Central Park as "artifact-filled," complete with etchings and presidential china.

Photo albums on Landau's websites show him posing with former presidents, Al Pacino and Charlton Heston. He has said that wives of presidents consulted him for inaugurations, and that he possessed more than a million presidential items, including 26,000 presidential menus and invitations.

The criminal charges shattered Landau's image and revealed a cash-strapped collector who, after his arrest, had to get the court to let him sell an Andy Warhol print of Elizabeth Taylor to pay his $2,700-a-month rent. In court documents, he claimed that he had $1,544 to his name, and that he made $11,000 in salary last year. Prosecutors said they were skeptical of his professed money woes.

•A four-page personal handwritten letter from John Jay Audubon to Gideon B. Smith, dated May 18, 1843, taken from the Connecticut Historical Society.

•A single-page letter from Marie Antoinette written in French on Oct. 2, 1784, taken from the Connecticut Historical Society.

•A letter written by Karl Marx on April 14, 1874, to P.H. King inquiring about the title and price of a book bearing Marx's signature, taken from the Wilbur Collection at the University of Vermont Library.

•A Baltimore City property receipt dated June 1, 1861, signed by Abraham Lincoln, granting land to Private John Larn, a former member of the Maryland militia who served in the War of 1812. It was taken from the Maryland Historical Society.