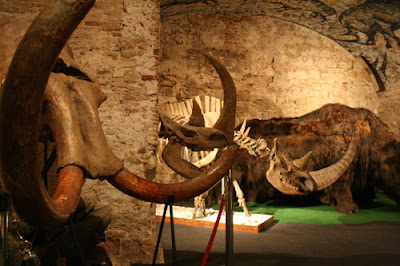 Stolen from Spain's Museum of Mammoth in Barcelona, ivory € 1 million


The Catalan Police confirmed that the theft occurred between the night of
Saturday and early Sunday, with the loss of more than * 20 * tusks,
50 kilos of * each *

He explained the official, the thieves, who forced the door
entrance, disabled the alarm and escaped the surveillance system
private well be the filming of the security cameras. * It
calculated that took 20 tusks, about 50 kilos each and a
10,000 years old. *


Ivory is quoted more than a thousand euros a kilo.


In addition, the thieves, who could have acted on behalf, * also
leading figures made ​​of ivory chess sets and a pendrive also
ivory, and a figure of a cat made ​​of gold and diamonds. *

The Catalan police recovered the 20 ivory tusks removed,
worth one million euros

Some of the ivory pieces stolen last weekend. Of
left to right a figure of the Virgin of Montserrat, and fangs
a figure of a warrior on horseback.

The thief of 24 ivory tusks Mammoth Museum of Barcelona
was the former director of the center. He allegedly entered Sunday
morning by the front door, turned off the alarm, opened the windows,
Ivory took all the courage and the recordings of the cameras
video surveillance, and fled. The Police arrested him a day
below and find the valuable pieces in a warehouse in Cerdanyola of
Vallés.

The man, Ramon Manuel GA, has argued for work for the theft,
According to sources in the environment, but deny the museum, although they admit that
always suspected that the robbery had to be someone close. The
the stolen museum valued at nearly one million euros, while the Autonomous
say is not worth more than 500,000.


Security at the Mammoth Museum in Barcelona was publicly denounced
last day 3 of the heads of the center. According to these, the fangs
stolen each weighing approximately 50 kilos. In addition, the thief
took a rhino horn, a cone of skin, 600 euros in cash and
remote control of the museum.
Posted by Art Hostage at 2:10 pm