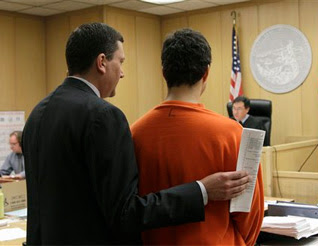 NEW YORK (AP) — A wine steward who plucked artwork off hotel and gallery walls in a bicoastal spree admitted Tuesday to stealing a $350,000 drawing in New York, resolving charges here after serving jail time in California.

An art-loving thief who stole to decorate his own apartment, according to prosecutors, Mark Lugo pleaded guilty to grand larceny in the New York case.

He admitted he took the pricey sketch by the Cubist painter Fernand Leger from a lobby gallery at Manhattan's Carlyle Hotel on June 28 — one of the New York thefts prosecutors said Lugo accomplished by lifting art off hotel walls and walking off with the works in canvas tote bags. Besides the Leger, he was charged with stealing five works by the South Korea-born artist Mie Yim from another hotel on June 14.

Lugo, 31, is set to be sentenced Feb. 28 to one to three years in prison. His lawyer, James Montgomery, noted that Lugo could get out in less than a year if he succeeds in a boot-camp-style prison program.

Lugo was publicly identified as a suspect in several New York heists shortly after his July arrest in San Francisco. Authorities there said he strolled into the Weinstein Gallery, took a $275,000 1965 Picasso drawing "Tete de Femme (Head of a Woman)" off a wall, walked down the street with the sketch under his arm and hopped into a taxi. Police tracked Lugo to a friend's apartment in nearby Napa County.

At Lugo's own apartment in Hoboken, N.J., investigators then found a $430,000 trove of stolen art on display.

Among some 19 artworks at the apartment was Leger's 1917 "Composition with Mechanical Elements," the Manhattan district attorney's office said. The drawing disappeared June 28 from an employee entrance area at a gallery in the Carlyle Hotel.

Prosecutors have said a search of Lugo's apartment turned up four other pieces — including a Picasso work — that may have been stolen from Manhattan venues. But he was charged in New York only with the thefts of the works by Leger and Yim, who's known for her disconcerting images of toy bears and other creatures.

"In an effort to display stolen art in his apartment, this repeat art thief boldly walked out of two Manhattan hotels in broad daylight" with valuable works, District Attorney Cyrus R. Vance Jr. said in a statement when Lugo was arraigned in New York last month.

Lugo, a sometime sommelier and kitchen server at upscale Manhattan restaurants, also is charged in New Jersey with taking three bottles of Chateau Petrus Pomerol — together worth $6,000 — from a Wayne wine shop in April.

As for the San Francisco charges, Lugo pleaded guilty in October to grand theft. He finished his 138-day sentence on Nov. 21.

Montgomery declined to comment further Tuesday; he has previously said Lugo "had no commercial motive at all" in his actions. Lugo's San Francisco attorney, Douglas Horngrad, has called him "more like someone who was in the midst of a psychiatric episode" than a calculating art thief.