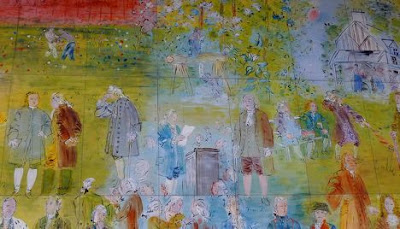 Fifty valuable works of art have been discovered right under the noses of police, in the back of a van parked outside a police station.

Police became suspicious when two men were seen unloading paintings from the back of the van, reported Le Parisien newspaper on Friday.

The van was sitting outside a police station in the north Paris suburb of Saint-Ouen.

Once apprehended, the men declared themselves to be an artist and a second-hand goods dealer.

They also claimed to have painted some of the works themselves, in the style of the originals, and bought the others at markets.

A search of the homes of one of the men on Monday uncovered a further twenty valuable paintings and sculptures.

The newspaper reported that some of the art works date back to robberies from over ten years ago.

French authorities are claiming that art dealer Guy Wildenstein owes $330 million in back taxes to the French internal revenue service for undervaluing the estate of his father, Daniel Wildenstein, ArtInfo reports.

The French internal revenue service reportedly determined that Guy Wildenstein had hidden parts of his inheritance in trusts in Jersey, the Bahamas, and the Virgin Islands, according to ArtInfo (via Le Point).

Add this indictment to the list of legal challenges Wildenstein is already facing. In 2009, his stepmother sued for fraud related to his father's estate.

Thirty years ago, back in 1981, Emile Guelton walked into the Faure Museum in Aix-les-Bains, France, only to stroll out with a Camille Pissarro monotype under his jacket.

The brazen criminal then managed to smuggle the image, entitled “Le Marché aux Poissons” to the United States where it was purchased in 1985 by J. Adelman Antiques and Art Gallery in San Antonio. The gallery sold the Pissarro monotype to the Sharan Corp for $8,500. When that company was dissolved in 1992, former Sharan company owner Sharyl Davis, displayed the Pissarro in her home for ten years before deciding to put it up at auction with Sotheby’s in 2003.

It was then that the Art Loss Register noticed the work in the Sotheby’s catalog, which even mentioned Guelton by name, and contacted French authorities.

“Le Marche aux Poissons” is a petite color monotype, one of 12 colored monotypes which Pissarro created.

Pissarro is best known as a key contributor in the Impressionism movement, and the only member of the group to show in all eight Impressionist exhibitions. He is especially known for his images of nature, often rendered in short, broken brushstrokes.

The unique monotype in question here is a genre scene, depicting women at a fish market. After being pulled from the Sotheby’s auction, a long legal battle ensued, in which Davis asserted that she was the legitimate owner and should be compensated, if not allowed to keep the image.

“Le Marche aux Poissons” is now returned to France, after having been formally handed off by U.S. Immigration and Customs Enforcement Officials to the French Ambassador in a ceremony at D.C.'s Kreeger Museum on Wednesday.

An image by Renoir, “Buste de Femme” was stolen at the same time and later turned up in Japan.
Posted by Art Hostage at 6:33 pm