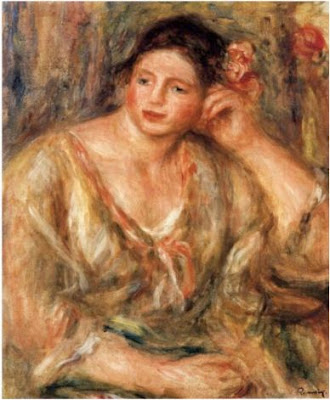 HPD sergeant, ex-FBI agent on the trail of stolen Renoir

John Bedingfield is a seasoned criminal investigator. The Houston Police Department robbery division sergeant spent nearly half his 20-year career undercover in the agency's vice division, immersed in the criminal underbelly of prostitution, gambling and money-laundering.

But when the case of a stolen painting by famed French Impressionist Pierre-Auguste Renoir landed on his desk last September, Bedingfield wasn't quite sure what direction to take.

The suspect's initial modus operandi seemed like a typical home invasion: Armed masked intruder makes demands for expensive items. But the only loot the bandit grabbed was the Renoir - something not likely to end up in a local pawn shop.

Enter Bob Wittman, a former federal agent who specializes in art crimes. During his FBI career, Wittman recovered the golden armor of an ancient Peruvian warrior king, captured crooks trying to sell a stolen painting by the Dutch master Rembrandt, and saved an original copy of the Bill of Rights believed lost for 100 years. Now running a firm in Philadelphia, Wittman was contracted by the company that insured the Renoir painting to aid in the investigation.

Using Bedingfield's knowledge of Houston's criminal landscape and Wittman's expertise in art theft, the two have worked tirelessly in hopes of catching the culprit and recovering the stolen painting, Madeleine Leaning On Her Elbow With Flowers In Her Hair.

The pair have entered the painting into stolen and lost art databases. Bedingfield has chased down leads all over the city, even following through on a tip from someone who overheard a suspicious conversation at a car wash. He also has explored the possibility that the crime had some connection to a rash of burglaries in the same area during that time.

This week, the insurance company announced it's offering up to $50,000 for information leading to the piece - double the previous reward - in an effort to generate leads.

While the painting's value was not released, Wittman said it is estimated to be in the high six figures. Both men say whoever stole the painting probably had no idea what they were taking, and that it's probably hidden under a bed or tucked away in a closet somewhere.

The robbery occurred shortly before 10 p.m. Sept. 8 at a residence near Woodway and Chimney Rock, Bedingfield said. The victim, whose name was not released, told officers she saw a light flashing on the first floor of her home. When she came downstairs, she was confronted by a man wearing a ski mask and gloves, armed with what she believed was a gun.

She told officers the man began demanding money and diamonds. Fearing he would go upstairs, where her young son was asleep, she pointed out the Renoir by the stairs as the most valuable thing she owned, Bedingfield said.

After taking the painting and her cellphone, the robber left by a back door.

Police believe the man got onto the property through an unlocked gate and broke into the house through a door by the garage. The home­owner had no security system installed, Bedingfield said.

While the crime may have been one of opportunity, the robber ended up with the same problem faced by most art thieves, Wittman said.

"They are better thieves than they are businessmen," he said. "Generally speaking, in my career, they don't know what to do with it once they've got it."

High-end pieces by artists such as Renoir are generally quite recognizable, making the work difficult to sell, a common problem with art theft. There's no market for pilfered art because those who can afford to buy pricey paintings do not want to buy stolen pieces. Wittman has never seen a stolen piece of art sold successfully.

"Over and over again in my career, it ends up that I'm the buyer because they can't find a legitimate person to buy it," he said.

It can take years to recover stolen art. Wittman said art thieves often wait until they believe the commotion surrounding the crime has died down before trying to sell.

Wittman's biggest fear is that the painting could be destroyed by a frustrated criminal, anxious to get the piece off his hands.

MONTICELLO — Sullivan County businesses buying and selling used jewelry would have to become licensed and tighten up their record-keeping under a proposed law being pushed by District Attorney Jim Farrell.

The law, set for a public hearing at 1:50 p.m. on March 16, targets pawn shops, antiques dealers and other businesses trading in diamonds, gold, silver and other precious metals or gems.

His proposal is in reaction to a spike in burglaries and the theft of jewelry that can be sold for quick cash. Quick resales and shoddy to nonexistent record-keeping have hampered investigations by police and prosecutors, Farrell said.

"The trend I've seen is occupied homes," Farrell said. "While these people are at work trying to support their families, they're being victimized."

The proposed law would require all dealers in used jewelry and gems to apply for the license. Applications would require fingerprints, a background check and a $200 fee.

The draft law would also prohibit purchases from sellers under 18, ban purchases between 10 p.m. and 6 a.m. and mandate a 15-day waiting period before items could be resold.

"When we go to these pawn shops or dealers, the merchandise is already gone," Farrell said.

Businesses would also be required to keep digital photos of purchases and descriptions of identifying marks or engravings. Those records would have to be emailed to the district attorney's office and local police within 48 hours.

Most of the law's requirements mirror safeguards already in place at Big Ben Jewelers in Monticello, said Suzie Gold, the shop's longtime manager.

Exterior cameras document cars and license plates, and interior cameras record each transaction, she said. Big Ben also scans purchased jewelry into digital images and is wary of sellers who appear nervous or unlikely to own expensive jewelry.

"We don't have to take it," she said. "We can say we're not interested and show them on their way."

Bernardo Escobar has owned A & B Jewelry & Boutique in Monticello for over 19 years. He pulled out a binder with photocopied pages. Each held an ID and a piece of jewelry the shop bought.

"A lot of people have gone to jail because I keep the book," he said.

Death of art thief in Maplewood is ruled a homicide

MAPLEWOOD • The November death of a convicted art thief was ruled a homicide this week after the St. Louis County medical examiner completed a study of the man's brain.

Police and the medical examiner's office aren't revealing the cause of death, but say it's now classified as a homicide. On Wednesday, Lt. Mark Griffin of the Maplewood Police Department said detectives are still investigating the case and have made no arrests.

In November, police said there were no signs of a break-in or struggle inside Rasch's home. He did not have any outward signs of injury, police said. And an autopsy was inconclusive, so authorities were awaiting toxicology results.

Rasch pleaded guilty in 2005 of conspiracy to transport stolen goods in interstate commerce, admitting that he and another defendant stole 133 pieces of artwork valued at up to $4 million in June 2002.

He was sentenced to two years in prison in that case. He also pleaded guilty of one count of making a false statement in 2007 in a case involving art stolen from a store in Bridgeton.

Don Rasch was sucker-punched in the side of the head by a person in the neighborhood for no apparent reason. The local police department apparently knew the suspect but haven't acted on it - and I'm sure they've forgotten.

Sad, really sad. Don paid his debt to society and was making restitution the best he could. He was gainfully employed, clean, and optimistic. I saw him two weeks before the assault, and a day before he was removed from life-support. At least he left this life knowing he was making his way honestly and was on a decent path.

His co-conspirator, however, managed to avoid Karma.