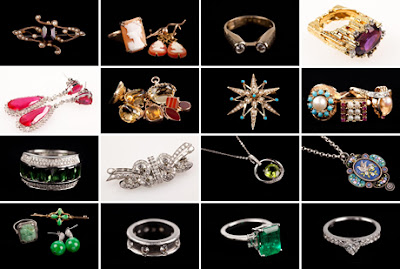 POLICE launched a series of raids in Glasgow’s East End in a major crackdown on traders suspected of selling stolen goods.

Extra officers, using state-of-the-art technology, swooped on premises in the Gallowgate area, including the Barras Market, in a bid to combat the illegal sale of stolen items.

The day of action, which started early on Saturday, saw dozens of officers from Strathclyde Police target ‘hotspots’ of criminal activity.

Detectives believe one organized group may be responsible for a spate of high-value jewellery thefts in Perth and Kinross, Scotland.

Since Christmas, a large number of properties across the county have been raided — and Tayside Police has confirmed that at least half a dozen appear to be linked.

Over £30,000 worth of jewellery was taken from the six homes in Crieff, Kinross, Auchterarder and Madderty between January 6 and February 5. Stolen items include heirloom gold chains and wedding rings, diamond engagement rings, broaches and designer watches.

The force has launched a major intelligence operation in a bid to trace the culprits, who may come from outwith the area.

Detective Sergeant Graham Lee said the local community holds the key to bringing those responsible to justice. He urged householders to be vigilant and to notify the police if they spot anything or anyone suspicious.

The six thefts all took place between 9am and 5pm, when many people are out at work. Reports of cold-callers in the affected area are being looked in to as it is believed that criminals may be using this tactic to identify empty houses.

DS Lee confirmed: ''There have been six break-ins to properties in south Perthshire and Kinross which we are linking because of a number of similarities. In these incidents alone, more than £30,000 worth of items were taken.

''We have a team working hard to trace those responsible and we are determined to get a result."

He continued: ''Local residents are really key to this type of investigation. To achieve a breakthrough we need a homeowner or dog-walker who spots someone they don't recognise and reports it. It is useful to take down an individual's appearance and their registration number.

''Obviously most people are completely innocent but we would rather investigate than miss an opportunity. In particular, if anyone comes to your door unexpectedly, let us know. Thieves sometimes use unsolicited cold-calling to identify empty homes.

''Never let anyone in your home until you are certain of who they are, or who they claim to represent. People must be vigilant. It is members of the local community who are most likely to spot someone suspicious.''

DS Lee said the ''rocketing'' price of gold could be one reason criminals are turning to looting.

''The value of gold has gone through the roof so it has become a very valuable commodity,'' he explained. ''It is also very easy to dispose of these days, as a number of companies will accept items by post.

''All someone has to do is enclose jewellery in an envelope and pay for postage and a few days later they will receive a cheque. Though this technique makes it slightly more difficult to trace items, we endeavour to do all we can and would urge any firms who receive a suspicious package to notify the authorities.

''If they have reason to believe they have received stolen goods, they are obliged to contact the police.''

The force has also asked people to keep an eye out for elderly or vulnerable neighbours.

DS Lee said: ''Though there has been a rise in the number of break-ins in the Perth and Kinross area over the past month, it is important to remember that the region is still one of the safest in Scotland.''

Following a high value theft at McTear's earlier this week, we are offering a reward of up to £10k for information that leads to the return of the stolen jewels.

Thieves broke in to McTear's in the early hours of Tuesday 17th January taking approximately 300 items of jewellery - worth approximately £430,000 - in the raid.

Brian Clements, Managing Director at McTear’s said: “A number of our clients lost items in the theft and we want to do everything we can to recover the jewellery and return these unique pieces to their rightful owners.
“We are working closely with Strathclyde Police and the independent charity Crimestoppers as the inquiry continues and we are hopeful that the reward will help to uncover some additional information that will help the authorities to identify and prosecute those involved.”

The stolen jewellery includes ladies' rings, earrings, bracelets and necklaces. Pictures of the items can be found on our Facebook page

First of all to the actual value of the McTears jewellery stolen.

The figure of £430,000 is the trade value which would be paid by dealers and some private clients at the auction.

The retail value which dealers would charge the public is between £2-2.5 million because the mark up from Trade value to Retail value is about six times.

Therfore this raid has been underplayed somewhat.

Then the initial buyer from the thief can either sell on for £200,000 and double their money quickly, or split the parcel and sell them in packages which could reach near the trade value of £430,000.

Then whoever has the jewellery can filter it back into the legitimate market at Antique Jewellery fairs in the UK, Europe and America for up to the retail price of £2-2.5 million.

The Police raids at the Barras in Glasgow over the weekend are a direct result of Police trying to flush out a lead by hoping to arrest some dealers at the Barras and using potential criminal charges to obtain inside information about the McTears raid and the whereabouts of the Jewellery.
Posted by Art Hostage at 2:02 pm

its great its really helpful for you JEWELLERY AUCTION

For the record McTears didnt loose a penny from this robbery. They have informed all their customers its not their responsibility its the clients!!! So Mctears wasnt robbed, the people who put anything in their are the ones robbed. in fact the only way they will be out of pocket is if they ever need to pay out a reward!!!!!.....

McTears Management has now liquidated this company preventing clients from suing it for the value of their stolen items and is trading under slightly different company name with same management.