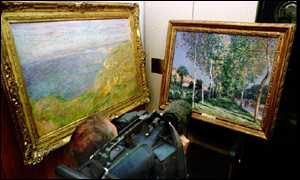 
Hooded and armed men staged a brazen afternoon heist at a museum in the French Riviera city of Nice today, making off with four priceless paintings: two Bruegels, a Sisley and a Monet.

Between four and five men entered the Beaux-Arts Jules Cheret museum in the heart of Nice this afternoon, when entry was free for the public.

Police said there were only about six visitors in the late 19th century building at the time. The robbers threatened staff members and then took the four paintings, put them in bags, and then escaped.

Two of the works by Impressionist painters Claude Monet and Alfred Sisley stolen today had also been taken during a 1998 robbery but were recovered a week later on a boat in a nearby town, Monique Bailet, assistant curator of the museum said.

The museum's curator at the time was convicted for that heist and sentenced to five years in jail.

The stolen oil paintings include Falaises pres de Dieppe (Cliffs near Dieppe) painted by Monet in 1897, and Sisley's Allee de peupliers de Moret (The lane of poplars at Moret), dating back to 1980.

"One of the staff members on the first floor told me that the men told him to lie on the floor as they put the paintings in bags. They wanted to take a fifth but could not do so," Bailet said.

Police said they had launched an investigation into the theft, which they described as a "special order", as the paintings cannot be sold on the market because they are well known.

The Sisley painting had been stolen in 1978 while on loan for an exhibition in Marseilles but was recovered a few days later in the same town.

The Nice museum is housed in the former private mansion of a Ukrainian princess, Elisabeth Vassilievna Kotschoubey, and was built in 1878.

City authorities acquired the mansion in 1925 and inaugurated the museum three years later. It was named after French artist Jules Cheret, who lived and worked in Nice during his final years.

The museum houses a collection of art spanning the past four centuries including paintings by Cheret and other artists who lived and worked on the French Riviera such as Gustav Adolf Mossa.

It also has sculptures by Jean-Baptiste Carpeaux, Francois Rude and Auguste Rodin, as well as ceramic pieces by Pablo Picasso.

Now this could be the "Balkan Bandits" or criminals from North Africa, however, the most sinister thing is the use of of guns.

The use of guns is getting ever more frequent.

The BBC are reporting that Police value the stolen quartet at 1 million Euros £670 thousand and change.

In this case however, it seems rather obvious and even those without any art market knowledge would value these artworks at much more, several million Euros minimum.

This kind of armed robbery is a taste of things to come, next stop mainland Britain !!

Something very big is in the works, will happen soon, watch this space !!


A little inside information, the Robbers spoke good English, leaving Police wondering if these were English Art Thieves on vacation ??????????? 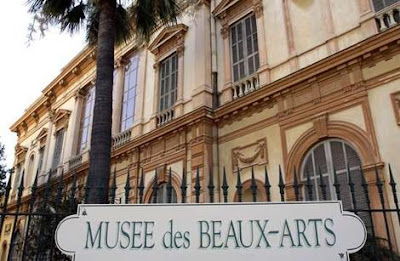 Maybe the paintings are being stored at a villa or farmhouse not far from the crime scene?

They will then be transported over the Channel to England by camper-van via Tunnel or ferry, mingling in with the August Bank holiday traffic returning to England.

From England they may even end up in Ireland at the museum of the missing?

Funny thing is, stolen high value art seems to pass through England even if it is to end up Eastwards into Eastern Europe, Russia, Ukraine.

London is a clearing house where underworld deals are done with stolen art, why, quite frankly because it is easy.