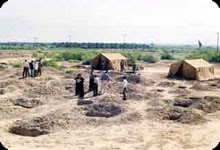 
Iranian security forces and police have confiscated a haul of antiques, which was planned to be smuggled into the United States.

The haul, which is believed to be the biggest ever discovered, included over 300 antiques of high historical and cultural value.

The collection of Iranian relics, European artworks and historical oriental items, hidden among household appliances, was discovered by Tehran's Customs.

A priceless handwritten Quran with illuminations and a painted book cover dating back to the era of Qajar king Nasereddin Shah (1848-1896), and European crystal dishes belonging to the mid-19th century have been found among the objects.

Historical glazed clay bowls as well as bronze statues dating back to the second millennium BC and tens of other historical objects were also planned to be smuggled into the US.
Posted by Art Hostage at 4:23 pm