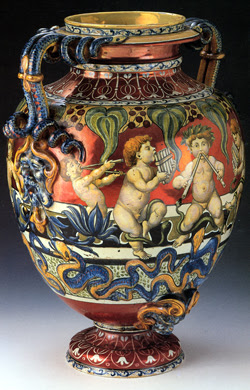 Unique Victorian art work has been stolen from a Wandsworth museum.

The De Morgan Centre, a museum inside West Hill Library, West Hill, was burgled at 1.30am on Sunday.

Police believe the culprit or culprits broke into the centre, which holds an extensive collection of 19th century art and crafts ceramics, through a bathroom window.

Once inside a glass cabinet containing expensive plates and jugs was smashed and the contents stolen.

The pieces, by William De Morgan, included a red and gold lustre dish of a snake wrapped around the body of a winged dragon.

Damaged ceramics were found at the scene.

Detective Sergeant Neil Philpott, the investigating officer, said: "A man was seen loitering outside the building and we are appealing for any information that can help us trace him or the people responsible for this. The ceramics belong in a museum for the public to see, so we need your help to return them to their rightful place." 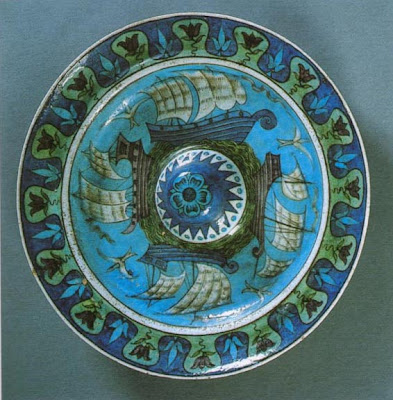 This was the raid I was referring to, bloody shame, the public is going to be denied the ability to view these Unique items.

The thieves will only get a small amount for these unique items, see below, it will be the Stolen Art Handlers who will want unrealistic amounts to return them to the De Morgan Centre.

A guideline to Judges to give out minimum Ten Years for theft from a Public Building or Museum may kerb this kind of activity.

Under the 1968 Theft Act Judges can sentence defendants up to Fourteen years jail time so there is no need to put forward new legislation.

It has worked well as a deterrent in the United States under The Theft of Major Artwork provision in the 1994 crime bill legislated by Senator Edward Kennedy in response to the Gardner Art Heist of 1990.

However, this legislation has contributed to preventing the Gardner Art being returned, as anyone trying to do so would face Federal charges and 25-Life if caught in possession of the Gardner Art.

In an act of self-less public duty, the Gardner Museum supported the 1994 crime bill legislation, making it a Federal crime to steal artworks from public buildings and Museums, even though it would make recovering their stolen art harder.

Politicians like to herald new government polices that do not cost anything, well how about announcing publicly that anyone stealing from Public Buildings or Museums in the United Kingdom will face a minimum Ten Years jail time, it may cause dispersal of art theft to the private sector, but will provide a Comfort Blanket to hard pressed Museums who do not have the funds to tighten security.