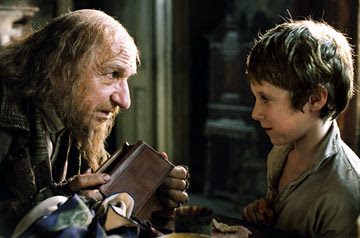 A nine-year-old "Oliver Twist" caught stealing jewellery from pensioners is believed to be Sussex's youngest burglar.

The boy, from Shoreham, had to be released by police without charge because he is under ten, the age of criminal responsibility.

He was working with a 15-yearold accomplice and they stole from properties in Shoreham after tricking the owners into letting them in.

The pair stole jewellery worth about £600, some of it antique, from two houses.

They knocked on the front doors and asked if they could use the toilet. Once they were let in, they went upstairs and rifled through bedrooms looking for cash and jewellery.

Homes in the St Julian's Road and Middle Road area were targeted by the youngsters last Thursday afternoon.

Officers made door-to-door inquiries which revealed the two youngsters had asked to use the toilet at four other properties but had been refused.

Neighbours reported seeing the children knocking on doors of other homes where the owners were out, climbing over garden fences and looking through windows.

Police were alerted to the youngsters' suspicious behaviour after one of the victims called them to report the two boys.

At that stage, the person didn't release they had been burgled.

When the police arrived, the boys ran away but were caught a short time later.

All the jewellery has been retrieved and handed back to the owners.

Earlier this week, The Argus reported hundreds of youngsters across the county had escaped prosecution for crimes including burglary, sexual assault, arson and hate crimes in the past three years.

By 2006-07 the number of children committing crime who were under the age of criminal responsibility had fallen to 118.

Chief Inspector Lawrence Hobbs, of the Adur division of Sussex Police, said: "It's highly unusual for us to encounter someone so young committing crimes.

Children under ten can break the law in the full knowledge they will never appear before a court.

He will now be referred to the youth offending team to try to prevent him from committing more crime."

The burglaries echo the story of Oliver Twist by Charles Dickens in which a young boy becomes a trainee thief under the watchful eye of an older accomplice, the Artful Dodger.

Detective Constable Steve Webb said Shoreham officers had never encountered the nine-yearold but the 15-year-old, also from Shoreham, was known to them.

DC Webb said: "When they were caught, the 15-year-old was trying to blame the younger lad.

He did look very young but we arrested him thinking he might be ten."

When it was found he was nine, the boy was released. DC Webb said: "The lad certainly knew right from wrong but still went out and committed burglary."

The 15-year-old was released on bail pending further inquiries.

These are part of the Brighton Art and Antique Knocker Boys Youth Section.

Normally, the "Nibbler Knockers" as they are called, scout locations for houses full of art and antiques, then they pass this information on to Adult Brighton Antiques Knocker Boys, who in turn try and purchase items using all the tactics at their disposal.

Whatever art and antiques cannot be purchased are then targeted by the Brighton Antiques Mafia A-Team Burglars.

Post theft, items are sold within the antiques trade by Elder Brighton Antiques Mafia figures, who started off their own criminal life as "Nibbler Knockers"

This is just one of the many reasons why Brighton, Sussex has always been the epicentre of the global stolen art trade.

The history of the Brighton Antiques trade is a subject I will review in the future.

The Blind Hedgehog and the Blind Wide-Mouthed Frog

A Blind Hedgehog met up with a Blind Wide-mouthed Frog and enquired, "what are you?"

"I am blind also, so if we describe each other we may be able to guess what we are?"

The Wide-mouthed Frog felt the Hedgehog and said, "you are spiky, have a long nose and short legs, pause.... I know, you are a Hedgehog !!!"

Then, the Hedgehog felt the Wide-mouthed Frog and said, "You are slimy, slippery, and my, you have a great big mouth, pause....... I know, you are a Brighton Antiques Dealer !!!" Art Hostage, you are continuing to hold our photograph of the William de Morgan charger hostage. This is being used without permission from the Fine Art Society. Please remove the image.

Would you please direct me, Art Hostage, to the offending photograph and I will remove it forthwith.

Once I have done that would you please "Fuck off" and get a fucking life.