Stolen Art Watch, Round Up of Everyday Art Theft !! 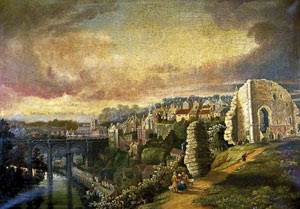 AN appeal for witnesses has gone out following the theft of a painting depicting a famous view of one North Yorkshire town.

The painting transferred to Harrogate Borough Council from the former Knaresborough Urban District Council on local government re-organisation in 1974. Knaresborough House has remained its permanent home and it is believed to have hung on the staircase there for the past 60 years.

Staff are helping police with their enquiries and were able to provide them with a very recent photograph that had been taken for a feature in a forthcoming national art publication.

The painting is believed to have been stolen between 3.00pm and 4.00pm on Monday, 6 August. It measures 85cm by123cm. Caretakers believe that the thief used the side door which is the disabled access to the building.

Police and the council are appealing for any witnesses to come forward.
If anyone is offered this painting, they should look for the council's identification number of HARAG 1080. 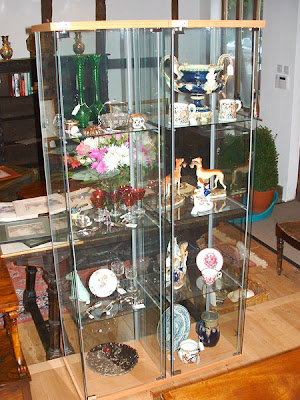 THOUSANDS of pounds worth of antiques have been stolen from Windsor House Antiques Centre in Moreton-in-Marsh.

The centre was burgled between 2.40am and 3.10am on Sunday morning.

Thieves entered through a first floor window, smashed a glass display cabinet and removed its contents before leaving the same way they came in.

The contents, mostly jewellery, was discovered missing at 11am on Sunday. At present an exact figure of how much was taken and what it was worth is unknown, but it was believed to be thousands of pounds.

Police are waiting for the owners to go through the stock to identify what is missing.

VALUABLE antiques, jewellery and a replica revolver were stolen in raids in the South Lakes.

Two properties were targeted yesterday in separate incidents which police are not linking.

Burglars broke into the study of the property and stole a mahogany Suther land gate-leg table with satinwood inlay to the table top. The table is 3ft long with two leaves, 18in wide each.

The second table is a Regency mahogany side table, 2ft 10in tall.

A spokesman for Cumbria police said: “We can’t say if the property was specifically targeted. The tables were big enough to pick up and walk out with.

“They’re hall tables and they could have been taken without a vehicle.”

The owners are in the process of speaking to antiques dealers to establish exactly how much each table was worth. The house was targeted between 7.30am and 11am yesterday.

The second burglary took place at a detached house in the area of Tower Wood, Bowness. Burglars smashed a window to break into the property between 1.45pm and 2.16pm.

A number of items were taken in the haul including various items of jewellery and a replica Desert Eagle revolver, similar to a Colt 45 pistol.

He said: “We’re still trying to assess exactly what’s been taken but it’s likely to run into the hundreds of pounds rather than thousands.”

Cumbria police are appealing to antiques dealers in the county who may be offered some of the items to come for ward with information.

Any witnesses to either burglary or anybody with more information is asked to contact Cumbria police on 0845 330 0247. 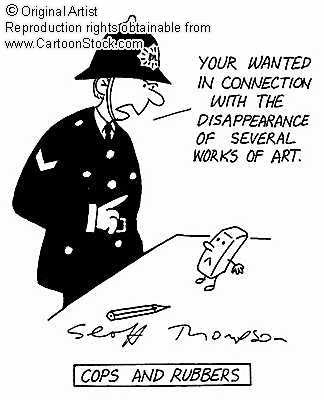 For every big art theft reported by the media, there are at least another 10 that go unreported.

Most are valued at £10,000 or less but are no less traumatic for the victims.