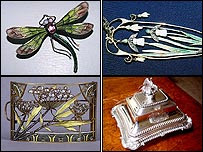 Art Hostage has just learnt, from an underworld source, that the intention to export the stolen Jewellery from Brighton to America has been put on hold.
Apparently the person in current possession of the stolen jewellery has been told of the adverse publicity. "Had their card marked"
This stolen art/Jewellery handler was under the impression that the items had been stolen from a private dwelling house, thereby not attracting publicity and easier to slip out of the country and sell in the United States.
Now the Brighton jewellery is in the public domain it has become what is known in the trade as "Headache Gear" stolen art to be avoided because of the headaches it causes.
The stolen art/jewellery handler is now looking to get their money back for the stolen Brighton jewellery, so it may yet wing its way back to Brighton.
Apparently the thief sold the items for under £1,000, then the price was several thousand to the current handler.
The current handler wants to be rid of the stolen Brighton jewellery but does not want to lose the money paid.
Going out on a limb, Art Hostage has asked an underworld source to pass a message through.
"Please set aside your profit motive for one moment, these three items of jewellery belong to the people of Brighton."
"Whilst not condoning handling stolen art/jewellery, this is a special case whereby the handler should wipe their mouth, look very big, and return the Brighton Three to Ben Parsons, Crime reporter for the Brighton Evening Argus.
(by means of telling Ben Parsons where to collect it, rather than risk breakage by sending the jewellery to him, Moron alert !!) Ben Parsons the peacemaker can be reached on
Brighton tel: 01273-544520
Ben Parsons is lobbying Sussex Police to start conducting random raids in pursuit of the Brighton Three pieces of jewellery, so expect this to start within a week.
Can those who deal in stolen art, antiques and jewellery really afford to take a chance of being raided, all for three bits of Tom Foolery, jewellery ???????????????
Will Sussex Police really start focusing on the Brighton Antiques Mafia ?
If the Brighton Antiques Mafia are not careful they run the risk of shooting themselves in the foot, and by not allowing the Stolen Brighton Three pieces of jewellery to surface it could turn out to be counter-productive and to the detriment of their everyday stolen art/jewellery dealings.

"Doing the right thing will protect doing the wrong thing"
In case you are wondering, Art Hostage does not have the names of those involved with this theft and does not know the identity of the current handler.

Underworld sources are told not to reveal names and specifics, as Art Hostage would be obliged to pass them on to authorities.

Potential targets are the safest way to prevent art crime.
If a target is identified it can be put on lock down.
When the thieves discover this they normally withdraw, only losing their travel expenses, rather than their Liberty.

It is a detente between the underworld and Art Hostage that prevents high profile art raids, the down side is it creates dispersal.

http://stolenvermeer.blogspot.com/2007/07/world-breaking-news-harry-potter-author.html
http://www.theherald.co.uk/news/focus/display.var.1563849.0.0.php
However, to coin the phrase, "Every little helps"
This Modus Vivendi allows Art Hostage to be kept up to date with the inside gossip that surrounds the stolen art world.