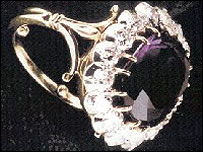 
Thieves forced a window and stole high value jewellery and ornaments in a raid on house in Surrey.
The objects included 18 Royal Doulton figurines worth £4,500, and a neck collar pin with a Swarovski crystal.

Police have now issued a photograph of a stolen ring in the hope that it would be recognised and encourage someone with information to come forward.

Officers said the burglary happened at the large detached house in Epsom between 8 and 10 August.

A spokesman said other distinctive pieces of jewellery that were stolen included a gold ring with a blue precious stone, and a necklace with small pink flowers.

Among the ornaments were a china white bowl of multi-coloured flowers and a set of canteen cutlery in a steel case.

Art Hostage comments:
The desire to steal valuable artworks and Jewellery are such that even if one Player is not active his influence means art theft continues unabated.
Stealing art goes on, and on, and on, and on !!
It is interesting to note that ---- -------- has one of the biggest collections of Royal Doulton figures, (including many rare examples), in Britain. This collector has many stolen Royal Doulton figures in the collection and buys a legitimate version to cover the stolen examples.

If this person was to buy these stolen Doulton figures I would defy anyone to distinguish them from the many thousands of other figures and examples in this collection.

This avid Doulton collector also checks the stolen examples for ultra-violet markings on the base and removes where necessary.

Stolen Royal Doulton figures are easy to sell, for nearly full trade value, because they are so numerous.
Princess Badoura, below, is the most coveted and valuable Doulton figure worth tens of thousands of Brit Pounds. 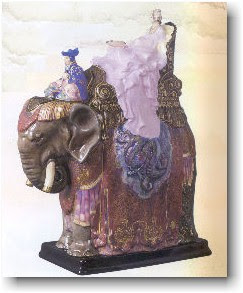