Stolen Art Watch, Diamonds, Not a Best Friend for this British Girl !! 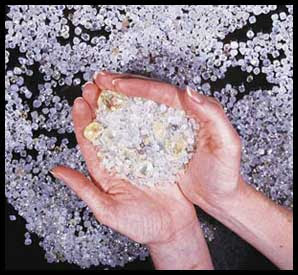 A British woman has been arrested for allegedly smuggling over £6m worth of diamonds into the Philippines.

Alpha Kwok was arrested in Manila on Tuesday by the country's anti-smuggling group.

The agency's head Antonio Villar Jr said officials seized 160 carats of diamonds along with other precious stones - some of which were already made into jewellery.

A Foreign Office spokesperson told Sky News Online: "We are aware of the reports and are investigating the matter further."

Kwok, who was born in China and lives in Hong Kong, remains in custody pending a review of the case by the Filipino justice department.

Mr Villar alleged the woman may have been part of a smuggling syndicate.

"She doesn't have any permit to import, and she has no working permit," he said.

About 130 million carats of diamonds are mined across the world every year, and illegal trade plagues the sector.

One carat of diamond is equivalent to about 200 miligrams in weight, suggesting the amount seized was close to 32g
Posted by Art Hostage at 8:39 pm