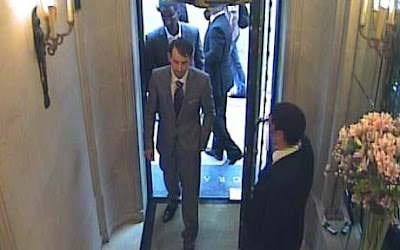 A £40 million raid on Graff Diamonds, the Mayfair jewellers, is thought to be the biggest ever gems heist in Britain.

Scotland Yard have issued CCTV images of two men dressed in suits, concealing handguns, who escaped with 43 rings, bracelets, necklaces and watches from the central London store last week.
They threatened staff at Graff’s with handguns, briefly seized a woman employee as a hostage, and fired warning shots as they made a getaway in a series of cars.

The extent of the heist had been kept secret but police have now disclosed that the items stolen had a retail value of $65 million (£40 million). Britain’s previous biggest diamond jewellery robbery is believed to be a £23 million raid, which also took place at Graff's, in 2003.

The two men, thought to be Londoners, arrived in a taxi at 4.40pm on August 6 and were only in the New Bond Street jewellers for a matter of minutes.

After being let in through the security doors both men produced handguns and threatened staff. They selected a total of 43 items and placed them into a bag before briefly seizing a woman employee hostage.

She was taken outside but released when the raiders made their getaway in a blue BMW, having fired a warning shot above their heads.

Their escape was nearly foiled when the car crashed into a black cab in Dover Street. As the driver and punters from a nearby pub gave chase, one of the men fired another round into the ground to warn them off.

The men then switched to a silver Mercedes, and later again into a black vehicle, possibly a Ford Galaxy or VW Sharan.

It is suspected that the jewels, meanwhile, were transferred to a waiting motorcyclist who was able to escape quickly.

Police believe there were at least two other men who were acting as getaway drivers for three cars.

Detective Chief Inspector Pam Mace from Scotland Yard’s Flying Squad said: “This was a well planned robbery with a number of vehicles used to help the robbers escape. These men are extremely dangerous and fired at least two shots in busy London streets as they made their getaway.

“Someone knows who these men are, they would undoubtedly have spoken about it beforehand or boasted about it afterwards. I would urge anyone who recognises them, knows the whereabouts of the jewellery or has any other information to contact us.”

The first suspect is described as white, about 30, with a slim build, dark hair with a well-combed side parting, light stubble on his face and 5ft 10 - 6 ft tall. He was wearing a grey suit, white shirt and tie.

The second is described as black, also in his 30s, 6ft tall, more well built than the first suspect, and with very short Afro hair. He was also wearing a grey suit, white shirt and tie.

Detectives believe the raiders targeted the most expensive items in the store. One officer said: “They knew exactly what they were looking for and we suspect they already have a market for the jewels. “

The suspects details have been circulated to all ports and airports but police believe they would have organised an escape route and may already have left the country.

Art Hostage Comments:
Police will have to earn their daily bread for once, and as there is no multi-million pound sterling reward, 10% of £40 million is £4 million at the very minimum, information will be thin on the ground !!!!
The two robbers have already been identified and Police are hot on their tails.
Arresting the two robbers captured on CCTV will not get the diamonds back.
The journey some of the stolen Graff diamonds will be a diplomatic route !!!
The Graff watches will adorn the wrists of high profile European figures ????
Next target is the question ????
Before anyone thinks about trying to predict the next target, remember there is no money, I repeat no money, for preventing any further jewel heists !!!!
More to follow...............................
Posted by Art Hostage at 6:02 pm