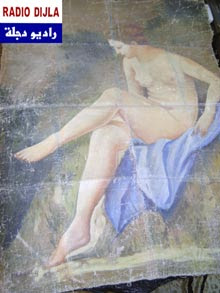 A Picasso painting stolen from Kuwait during Saddam Hussein's 1990 invasion has been discovered in southern Iraq.

Iraqi police arrested a man who was planning to sell "The Naked Woman" during a raid on his house in southern Iraq, officials said on Wednesday.

The painting was apparently among the artwork looted from Kuwait by Iraqi forces, said police spokesman Maj. Muthana Khalid.

It was seized on Tuesday during a raid near the mainly Shia city of Hillah, about 60 miles south of Baghdad.

The painting, which was signed by Pablo Picasso and bore inscriptions from "The Museum of Kuwait", was being held as evidence while the suspected was interrogated, Mr Khalid said.

Goods and artwork from the neighbouring country's wealthy homes and its national museum were hauled back to Iraq after the invasion, which led to the 1991 Gulf War.
-
However,
It is not the first time that this work by Picasso has drawn attention.
-
In the year 2,000 on 15 November the Turkish police located what was believed as the same piece, in a car in which were four people who had come to this country from Iraq.
-
Five months later, the Turkish deputy Mustafa Bayram was arrested trying to sell "naked woman" and "clown", works which, he said, he had sold to a woman who in turn obtained it from an Iraqi general.
-
Subsequent testing indicated that these pieces were fakes.
-
Art Hostage Comments:
-
The Jury remains out as to the authenticity of this Picasso.
Posted by Art Hostage at 1:19 pm

I have some information about naked women you can contact me