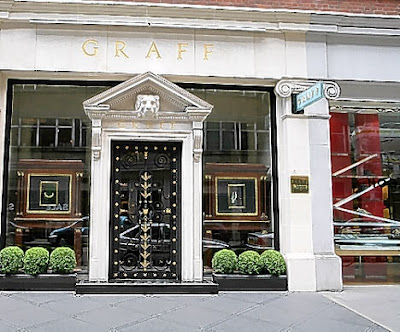 Two men robbed Graff Diamonds located on New Bond Street, in the Mayfair district of London. Described as smartly dressed, the men stepped out of a cab and walked into the store.

Once in the store, they brandished a handgun, threatening employees with it and grabbing gems and jewelry worth an estimated £30 million/$50 million.

As they exited the store, they took a woman hostage, firing warning shots at police and drinkers in a nearby pub chasing to the robbers.

Once out, the robbers climbed into a blue BMW only to ditch the car when it collided into a taxi. They then sped off in a silver Mercedes.

A 2003 robbery at Graff Diamonds in London netted the robbers merchandise worth £23 million ($38.37 million) from the shop.
Art Hostage Comments:
-
The two Graff robbers were last seen smoking smuggled cigarettes !!!
Posted by Art Hostage at 3:28 pm