Stolen Art Watch, Smash and Grab Back in Vogue !!! 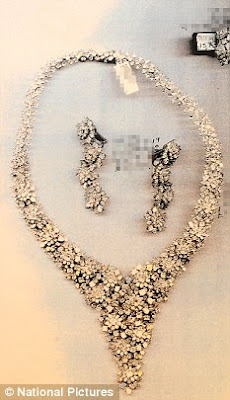 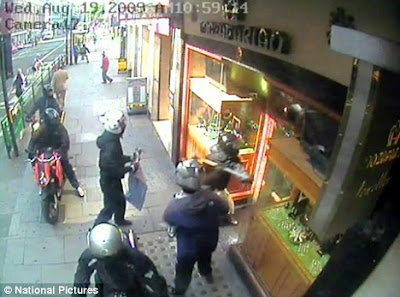 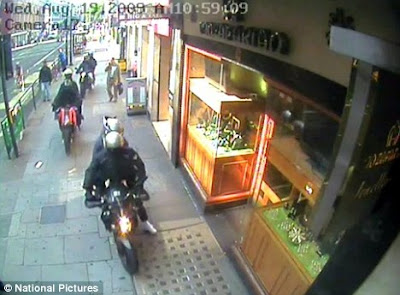 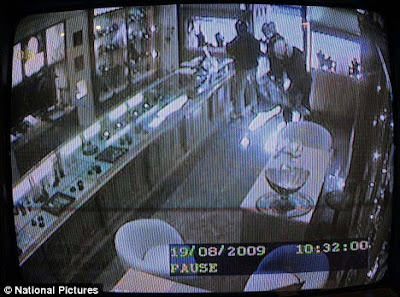 Gone in 39 seconds: £2m of gems stolen after brazen gang smash their way into jewellers with sledgehammer

This was the dramatic moment when a smash-and-grab gang stole jewellery worth nearly £2million in just 39 seconds.
-
Three motorbikes pulled up outside the Mozaferain jewellers opposite Harrods in central London.

Staff inside took no notice until six men approached the store and smashed the front window with a sledgehammer.

The robbers, wearing motorcycle helmets, barged in, broke open display cabinets and grabbed handfuls of diamonds before running out of the jewellers.

Manager Sokol Salia said: 'It was crowded on the street, as usual, and the motorbikes pulled up off the street on the pavement, which is not unusual.

'Then six guys, big guys, English guys, they had huge helmets, jumped off the bikes, then they smashed the window and came inside.

'The staff were two ladies and two guys, and they just took all the jewellery and that's it.

'They made a huge panic, such a scare all over, all the people on the street just running around.'

Staff were left shaken and in tears after the robbery last Wednesday. The elderly mother of one of the staff was also in the shop, and feared the robbers were going to take her hostage.

Mr Salia said: 'She was just standing there crying, she was very scared, she thought they were going to grab her, take her as a hostage. She was petrified.
-
'People on the street were too scared to get involved. There should be so much security around because it is near Harrods, but there was nothing.
-
'You don't know if they have guns or anything, like what happened at Graffs. It was just terrifying you know.
-
'We were just worried about the ladies, we didn't want them to hurt anyone, so let them take what they want, as long as the ladies were protected.
-
'They were big guys, so even if you have security there is nothing you can do, unless you have weapons.
-
'They didn't even need to pull a gun, they just smashed a window and we were so scared they might have weapons that no one did anything.'
-
The gang escaped with between £1.5million and £2million of jewellery, including a heart-shaped 1.5 carat diamond necklace worth £500,000.
-
As they fled the store, the robbers dropped some of the jewellery on the pavement in Brompton Road.
-
Mr Salia added: 'People were collecting up the jewellery on the street and brought it back to us, people were very nice.'
-
It comes less than two weeks after £40million of jewellery and gems were stolen in an unconnected heist at Graff in Mayfair.
-
Mozaferain jewellers, which is fitted with extra-tough glass, was targeted in a similar raid in June.
Mr Salia said: 'We just heard about Graffs and the guns, that's what comes into your head, you are unprotected.
-
'Even if I have security, what could I do to them? I don't have a gun, we're not allowed to.
'This is my life, I have to work, I have to pay taxes, now I wait for the police to come and I will say I need to be able to protect myself.
-
'Not a gun, but some safety should be in every jewellery shop, otherwise they have to protect the streets, they have to be there. What are we supposed to do, how will we protect ourselves?
-
'The area is not safe at all, banks and jewellery shops not safe, even if they have security, there is nothing they can do.'
-
Police believe the gang is newly-formed and struck after a North London crew behind more than 70 raids in the West End were recently caught.
Posted by Art Hostage at 10:25 am