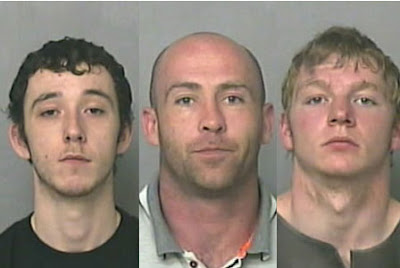 THIEVES who preyed on an 84-year-old man, stealing cash he had saved for his twin brother's funeral, have been jailed for a total of 11 years.

Cyril Langstone woke up on the day he was to go to the service for his beloved brother Victor to find the raiders had taken £1,600 he had set aside to pay for the ceremony.

The court heard he had still not found the money to pay the funeral directors after the burglary at the home he shared with his twin.

Mr Langstone was left fearful he could be targeted again and said he thought about suicide when it first happened.

Wearing hoodies, baseball caps and gloves to conceal their identities, the three perpetrators stole the cash and valuable antiques.

But they did not bank on being caught on CCTV by a hidden camera police had installed at Mr Langstone's Charlton Kings home following a previous burglary.

They were quickly identified and arrested.

Yesterday, Justin Leach, 34, of Devonshire Street, Cheltenham, who was on his 50th conviction, received four years in prison.

Ben McConnon, 18, of Colne Avenue, and 20-year-old Thomas Warburton, of Trinity Lane, were both given three-and-a-half years.

All three admitted burgling the home on June 21.

Prosecutor Julian Kesner told Gloucester Crown Court Mr Langstone had made a victim impact statement. It said: "Victor and I had lived together all our lives. We were very close. We both served together in the Second World War and in the 1970s started dealing in antiques in Cheltenham and opened a shop there.

"Victor died on June 5, 2011. It was a devastating blow. It is almost impossible to describe how I felt. Still, now, I expect to see him every day.

"I had put aside £1,600 in cash to pay for his funeral. All the cash was taken during the burglary.

"Since the burglary I have felt less safe at home. When I hear a noise at night I feel frightened and panicky. I hope this will improve with time."

Mr Kesner told the court Mr Langstone had been dreading the funeral so much he had taken sleeping pills.

He was asleep with his bedroom door open when the trio broke in through a window.

The trio would have been able to see him in his bed as they prowled around the small bungalow.

The court heard among the property stolen, was a bronze statue of the Minotaur worth £2,500, a 1902 art nouveau bowl worth £1,300, jewellery and a gold bracket clock as well as albums of stamps and coins and eight picture frames.

Warburton was the first to be arrested and he took police to a hedge in Willow Road, in Charlton Kings, where some of the loot had been hidden. A gold and diamond ring, a silver neck chain and a vase were recovered there.

The judge was told alongside Leach's string of convictions, McConnon had two previous house burglaries on his criminal record, Warburton had 13 previous convictions including one for house burglary.

Joe Maloney, for McConnon, said: "It was a most dreadful offence. For Mr Langstone to have suffered the loss he did and then for this to happen is absolutely appalling."

For Warburton, Mr Maloney said he, too, was sorry for what they had done. For Leach, Kannan Siva said he had written a three page letter of apology.

Sentencing him, Recorder Michael Meek QC said: "His letter is an expression of remorse in which he makes clear he spent the money on drugs."

He added: "For Mr Langstone to wake up and find that his house had been broken into on that day of all days was devastating. He is now fearful of being targeted again."

After the hearing, Detective Constable Peter Rowsell, who was the officer in charge of the case, said: "These men preyed on the home of an elderly man while he was asleep in bed. They showed complete disregard for any impact their actions would have. I would like to thank the victim for all his assistance throughout the investigation. I hope this sentence sends a clear message that those involved in this type of crime could well face a long spell behind bars."