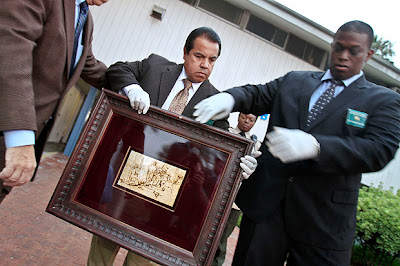 An L.A. County Sheriff's official confirmed Tuesday that deputies recovered a stolen Rembrandt from the pastor's office of an Episcopal church in Encino.

Investigators were still trying to determine how it found its way into the office of Father Mike Cooper and to verify whether it is an authentic Rembrandt. Cooper referred questions to Whitmore.

The sketch titled "The Judgment" was recovered after authorities received a tip Monday evening that someone had seen the artwork on church property.

Deputies went to the property and recovered the drawing, which was positively identified by its owners, the Linearis Institute, Whitmore said.

No one has been arrested in connection with the theft, he said.

"We have the Rembrandt at the station evidence lockup...we are now seeking to authenticate it is a Rembrandt with other sources," he said.

Whitmore said detectives still plan to release a sketch and images of a person involved in the "well-thought-out, well-executed theft."

The 11-inch-by-6-inch quill pen and ink work dating to about 1655 was part of an exhibition staged by the Linearis Institute. Officials at the institute have not returned telephone calls.

It was stolen Saturday between 9:20 p.m. and 9:35 p.m. when a curator told investigators he was distracted by a guest.

"When the curator turned back to the Rembrandt, it was gone," Whitmore said.

Art experts said works by Rembrandt are some of the most popular targets for art thieves, second only to those by Picasso, because of the artist’s name recognition and the value of the pieces.

Anthony Amore, chief investigator at the Isabella Stewart Gardner Museum in Boston and co-author of a book called "Stealing Rembrandts," said there have been 81 documented thefts of the artist’s work in the past 100 years.

One of those took place at the Gardner museum, where in 1990 a pair of thieves posing as police officers gained entry to the museum and stole 13 works of art, including three Rembrandts. The crime remains unsolved.

In the majority of cases, stolen Rembrandts have been recovered, either when thieves were caught or returned the items, sometimes in an attempt to claim reward money after they were unable to sell them.

Thieves find famous artworks extremely difficult to sell because of their high profiles and the publicity generated by such thefts, he said.

"I’d be shocked if the person who stole this piece had any idea how to fence it," Amore said.

There are about 700 surviving drawings that experts agree to be Rembrandt’s work, said Amore’s co-author, Tom Mashberg.