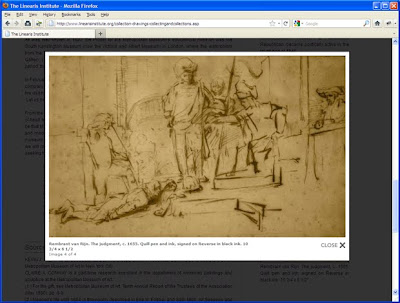 A Rembrandt work valued at more than $250,000 was stolen Saturday evening from a private art exhibit at the Ritz Carlton Marina del Rey when a curator was distracted by an apparent diversion, Los Angeles County Sheriff's officials said.

The painting vanished from the exclusive hotel between 10:20 and 10:35 p.m., said Steve Whitmore, a sheriff's spokesman.

"The hotel has top quality security. We believe this was a well-thought out and well-planned theft," Whitmore said.

Located at 4375 Admiralty Way in Marina del Rey, the Ritz-Carlton is known for its art exhibits.

The work by Rembrandt van Rijn, the renowned Dutch 17th Century painter and etcher, is said to be titled "The Judgment."

Los Angeles County sheriff's investigators believe that a man working with accomplices is responsible for the theft of a Rembrandt drawing from an exhibit at the Ritz-Carlton Marina del Rey.

After reviewing hotel surveillance footage related to the theft of a Rembrandt late Saturday from a private art exhibit, detectives have determined that at least one man was involved, and he was probably working with other suspects in the well-orchestrated heist, sheriff's spokesman Steve Whitmore said.

The theft occurred when a curator was distracted by another person, officials said. The pen-and-ink drawing, valued at $250,000 or more, disappeared from the hotel between 10:20 and 10:35 p.m. "Our detectives are reviewing the hotel security video for information identifying those involved," Whitmore said.

Whitmore said the small piece, approximately 11-by-6 inches, is by Rembrandt van Rijn, the 17th-century Dutch master, and is titled "The Judgment." It was being exhibited in the hotel lobby and belongs to the Linearis Institute in Northern California.

"The hotel has top-quality security. We believe this was a well-thought-out and well-planned theft," Whitmore said. Sheriff's investigators plan to release an artist's sketch of a suspect in the theft.
Posted by Art Hostage at 7:37 pm