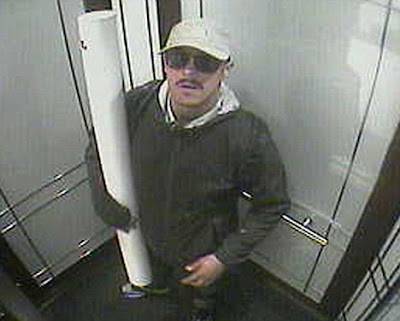 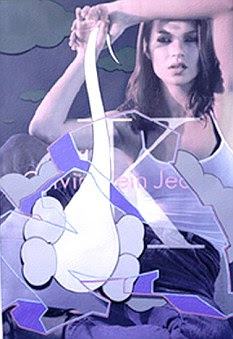 In the elevator and on the lift: The Burglar who walked out of New York gallery with $100,000 painting

Standing calmly in a gallery lift this man looks like any other art lover, only the souvenir he has under his arm is a stolen $100,000 painting.

He then simply rolled up the artwork, put it into a tube and walked out of the building

A police spokesman said: 'The thief is around 5ft 11in and was wearing a dark green hoodie, blue jeans, a tan baseball hat, sunglasses and running shoes.'

The burglar was also carrying a dark backpack.

Artist KAWS, real name Brian Donnelly, briefly worked for Disney as a freelance animator before embarking on a career as a graffiti artist.

In the late nineties he began to produce limited edition vinyl toys and also created pieces using familiar images such as The Kimpsons, based on American cartoon, The Simpsons.

He has reworked other familiar icons such as Mickey Mouse, the Michelin Man, the Smurfs, and SpongeBob SquarePants.

Art thieves looking to make big sums of money from famous paintings have had to come up with imaginative methods to avoid being caught.

In 1911, one thief hid in a closet and waited until the Louvre was closed before grabbing the Mona Lisa and hiding it in his smock.

Dressing up as police officers enabled two men in Boston to remove paintings worth $300million without being caught.

Fast-acting thieves in Amsterdam broke into the Van Gogh Mueseum and made off with $30million worth of painting.

It was reported that they worked so quickly, the had already left by the time police arrived.

This is wrong- it wasn't a gallery, it's his office.

Crime , Crime why not people think be good enough with thoughts.