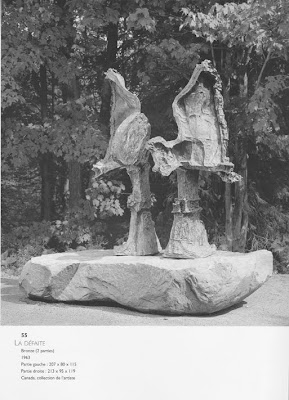 The statues, named "The Defeat," are valued at around $1-million according to the provincial police (SQ).

A white van – likely the vehicle used in the theft – was recovered later but no suspects or artwork was found on board.

The SQ says that sometime Monday someone reported that the statues were lying on the ground rather than standing on their pedestals across from Riopelle's former work space, where he also once lived. (Riopelle, one of Quebec's most famous artists, died in 2002 at the age of 78.)

A security guard noticed the white van and three men standing near the two statues. He alerted police but the statues had been stolen before they arrived. The statues measure 1,000 lb (453 kg) and five feet (1.5 m) and were created in 1963.

Sergeant éloise Cossette confirmed that police have very few clues about the suspects. One was more visible than the others and appeared to be in his early 20s and had a shaved head, wearing a blue shirt and multicoloured shorts.

One of the other men apparently fled on foot.

The statues were dragged on the ground before being stolen, as indicated by marks on the pavement.

The thieves might have stolen the works to sell them for the metal, even though their art value is considerably higher. Cossette says that in a similar recent theft of a bronze statue, thieves could have pulled in less than $1,000 for the metal, in that case, however, the work was recovered in time.

Quebec police say they have recovered a pair of massive bronze statues by Jean-Paul Riopelle that are worth about $1 million.

They were stolen on Monday in front of the workshop of the late artist, in Esterel, about 100 kilometres northeast of Montreal.

Provincial police told CBC News that they found the statues broken in four pieces, in a wooded area Tuesday.

On Monday, passersby noticed the statues – named La Défaite – had been knocked down and were on their sides instead of their pedestals.

Later, a municipal security guard who patrols the village of 250 noticed three men milling about the statues and called police.

Police said by the time they were alerted and arrived at the scene, the sculptures, which stand five feet tall and weigh 1,000 pounds, had gone
Posted by Art Hostage at 4:58 pm