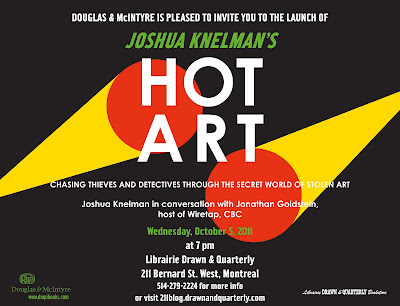 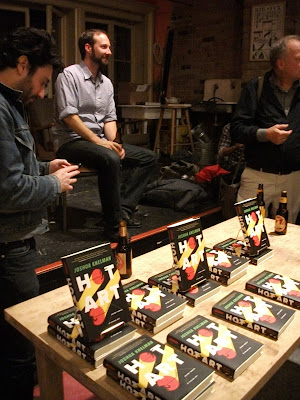 Out of work? Need some cash? You might want to think about boosting that valuable-looking piece of art you saw in your neighbour’s living room. Not that I approve of such a thing, but according to Toronto writer Joshua Knelman’s fascinating and gripping new book, Hot Art: Chasing Thieves and Detectives through the Secret World of Stolen Art, it’s quite likely you’ll get away with it.

You’d have to unload it, of course, to someone who knows the market. They’re the ones who will get it to the right people — seemingly respectable types who will pay top dollar without asking many, if any, questions. You’ll get paid immediately, but it will end up being a fraction of the top money, a sum which will likely be doled out months or years after you’ve lifted it, possibly with the bang of a gavel at an auction house. By then, the theft will be long forgotten, which is how an unwitting Steven Spielberg ended up hanging a stolen Norman Rockwell painting in his Beverly Hills mansion.

This is the sad theme that permeates Hot Art. As Knelman makes remarkably clear, the business of art is neither regulated nor particularly respectable. One detective he spoke to called it “one of the most corrupt, dirtiest industries on the planet,” which is a bit hyperbolic, but not far off. And the proof is in the book.

Knelman, an award-winning Toronto writer with a literary pedigree — his father Martin writes for this newspaper — is a very engaging storyteller and seems to have turned over every rock in his quest to make sense of the nonsensical business that is the art world. (The chapters covering the wit and wisdom of Paul, a reformed art thief from England, are particularly captivating.)

How nonsensical is it? The notion of documenting transactions that involve thousands, even millions of dollars, seems to elude those doing the transacting. This, naturally, throws legal ownership into question, an astonishing fact for a multi-billion dollar international industry. “You wouldn’t sell a $5-million plane without a document, would you?” the head of the FBI’s Art Crime Team says. “With art there is no document.”

Secrecy and handshakes are the grease that lubricates the rails that move art, both legally and illegally. When a museum is burglarized those in charge often won’t report it. Not only is it too embarrassing, it’s also not “conducive to their relationships with collectors and donors.” Needless to say, it’s hard to find works of art if you don’t know they’re missing. Actually, it’s hard to find them even if you do know they’re missing.

Not many resources have been poured into combating art theft, which overwhelmingly involves works that are not world famous and easily fly under the radar, contrary to the image the dashing Pierce Brosnan gives in The Thomas Crown Affair, which, according to Knelman, is as misleading a film about art theft you’ll find. (For one thing, thieves are much more proletariat.)

In Canada, for the longest time, there was only one dedicated art detective, Alain Lacoursière of the Sûreté du Québec. (He retired in 2008, but was succeeded by three full-time art investigators, though they only work in Quebec.) So recovery rates tended to be quite low and still are.

In the U.S. it’s thought to be anywhere from below five per cent to nine per cent. In Quebec, whose black market is estimated at about $20-million annually, it’s in the neighbourhood of 15 per cent. But the art capital of Canada is Toronto, and it has no dedicated art theft unit, nor are there any dollar estimates of how big its black market is.

More resources have been put into recovering stolen works of art, but Knelman says the bad guys are still winning, despite important tools such as the Art Loss Register and other databases. (As of May 2011, 659 Picassos, 397 Mirós, 347 Chagalls, 313 Dalís, 216 Warhols, and 199 Rembrandts were listed by the ALR as either missing or stolen.)

Still, the question must be asked: Does any of this matter? Knelman touches on this issue here and there and obviously he feels it does. For most people, those who don’t marvel at Monet’s moody interiors or Rembrandt’s bold strokes, it’s hard to know how any of this has any meaning. Obviously, looting something like the National Museum of Iraq in Baghdad is an ugly travesty. But does the lifting of a Group of Seven painting from Sir-Lots-of-Money’s foyer affect anyone but Sir-Lots-of-Money? Should more resources be put into finding stolen pieces of art or so-called real criminals? For me, I’d rather keep things the way they are. It makes for fabulous reading.

James Macgowan is a freelance writer.