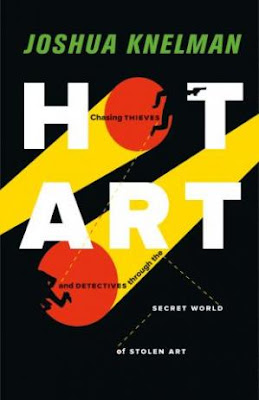 In his new book Hot Art: Chasing Thieves and Detectives Through the Secret World of Stolen Art, Toronto journalist Joshua Knelman writes that one Canadian city in particular occupies a place of distinction in the art crime world. Guess which one.

Bingo. Knelman says that, thanks to our ports, proximity to the world’s biggest art market in New York City, cultural connections to Europe and sophisticated organized crime network, Montreal is among the most important transit points for stolen art. “I found [the link between stolen art and the Hells Angels] surprising, and so did the SQ,” says the author from his Toronto home. “With most of the detectives I spoke to [in Montreal], organized crime didn’t come up. A delicate link was made, but that was something new. It was an interesting little window into how a billion-dollar market can be exploited.”

But Montreal, he points out, is also home to one of only two local police forces on the continent, in our case the SQ, with a dedicated art theft squad. The LAPD is the other.

In Knelman’s fun, fast-paced book, the city is just one stop a stolen piece of art can make on its way along shadowy, circuitous trips from victim to thief to middleman to dealer to end buyer. The journey can span thousands of miles, entire oceans and who knows how many borders. And usually, once a piece is gone, it’s gone forever. Until it reappears on the market, somewhere, somehow.

“One of the things I wanted to make abundantly clear in the book is, this is an epic game of hide and seek,” says the author from his Toronto home. “And there’s no doubt in my mind that the thieves are winning. It can take years, a generation, for these items to come up again.”

There are several contributing factors that make art theft both lucrative and fairly easy, Knelman writes. First and foremost is a lack of police resources. While a small number of police forces worldwide, and Interpol, have art crime units, they are usually underfunded and working in isolation. There is little communication among them, and, although he writes that the situation is changing, this accounts for the meager recovery rate, estimated at between five and 15 per cent. Second, the difficulty in tracking lost pieces. Even if a piece is reported stolen, it can be extremely difficult for anyone, including a cop, to follow the paper trail leading back to the original thief, thanks to the unregulated art market.

And third is the reticence of victims themselves to report the work stolen. Galleries fear their reputations will be damaged, and private individuals don’t want the embarrassment. It’s a vicious circle, and one that Knelman does an admirable job explaining—even if his conclusion is disheartening. “There’s a fully globalized black market for art,” he says. A stolen work “can go from local to global in a heartbeat.”

He describes his book in part as a coming-of-age story, following as it does two sides of the same coin. One is LAPD detective Donald Hrycyk, whose steep learning curve into the wild world of art is as dizzying as it is dense; the other is Paul Hendry/Walsh/Turbo Paul/Turbocharger, a retired English middleman dealing in stolen art. Their stories of how they entered their respective fields, how they navigated their sudden educations and the detailed explanations of their jobs make the backbone of the book. And veering as it does between Washington DC, New York, Philadel­phia, Cairo, Brighton and London made writing it, says Knelman, “the adventure of a lifetime.”