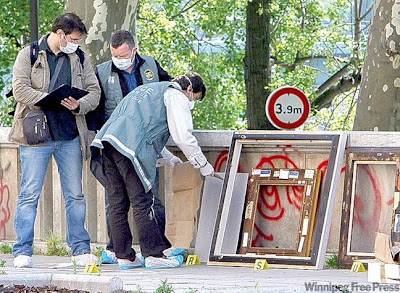 Officers search for clues as they pack up the frames of stolen paintings outside the Paris Museum of Modern Art last year. Police said a thief stole five paintings worth a total of $613 million, including works by Picasso and Matisse and Modigliani.

Psst... this Picasso here 'fell off a truck'

Jumping into the murky world of stolen art, this persuasive, fast-paced book from Toronto-based journalist Joshua Knelman might have you looking sideways at that little watercolour you inherited from your great-aunt.

Our culture tends to treat art as somehow separate from the grubby realities of getting and spending. Knelman demonstrates that the stolen art market is in fact a greedy global business: The FBI pegs the losses from art and cultural property crime at $6 billion annually.

He also argues that the line between the criminal underworld and the respectable daylight realm of auction houses, museums and dealers can be dangerously porous.

Knelman, the son of Winnipeg-born arts journalist Martin Knelman and a founding editorial member of The Walrus magazine, spent four years tangled up with hot art, talking with colourful crooks and obsessed cops.

Debunking the stereotypes of movies like the 1999 version of The Thomas Crown Affair, in which the art thief is a suave millionaire looking for a thrill, Knelman suggests that art theft is more often nasty and thuggish.

International organized crime is increasingly using art to launder money and trade for weapons and drugs: Knelman describes a raid on a Hells Angels clubhouse in Montreal in which police recovered a $75,000 Jean-Paul Riopelle sculpture that was being used as a doorstopper.

Spectacular museum thefts of big-name art occasionally grab the headlines. One former thief calls those stolen Picassos and Monets "headache art" because they're easy to steal but hard to sell. But most hot art gets no attention at all.

Despite being a multimillion-dollar business, the secretive, insular art market is the "least regulated and the least transparent activity in the commercial world," according to one of Knelman's sources.

Many of the people involved aren't keen to change that. Theft is under-reported and acquisitions often proceed with no questions asked, meaning stolen art can move back into the legitimate market with just one transaction.

Law enforcement doesn't really know how to handle stolen paintings, which have very different issues from jacked cars and boosted electronics. Knelman profiles some of the very few lawyers, bureaucrats and detectives who specialize in art theft -- driven, isolated figures who work on cases that can stretch over decades.

Getting very little institutional support, these men and women keep going out of pure conviction: "Cultural property is permanent. We are fleeting," says one.

There are some entertaining stand-alone accounts. An unassuming art historian gets drawn into James Bond-style intrigue trying to get back what the press eventually dub "the takeway Rembrandt," a small portrait that has been stolen four times from the Dulwich Picture Gallery in London.

A Canadian makes an Antiques Roadshow-style score -- a flea-market Gainsborough! -- only to see it turn into a financial and legal nightmare.

In this major work of detailed, downright investigative journalism, Knelman clearly and coherently sets out the facts. He has a harder time making them zing.

Despite exhaustive physical descriptions -- everyone he meets has "wolfish blue eyes" or "twinkling grey eyes" or eyes "the pale shade of meridian turquoise" -- many of his subjects remain flat and one-dimensional.

The art is compelling, though, from the still-missing works by Vermeer, Manet, Rembrandt and Degas stolen from the Isabella Stewart Gardner Museum and now marked by empty frames, to the antiquities looted from the National Museum of Iraq during the chaotic course of the war.

As a comprehensive introduction to an urgent and under-reported issue, Hot Art deserves attention.

Winnipeg journalist Alison Gillmor lectures in art history at the University of Winnipeg
Posted by Art Hostage at 2:22 pm