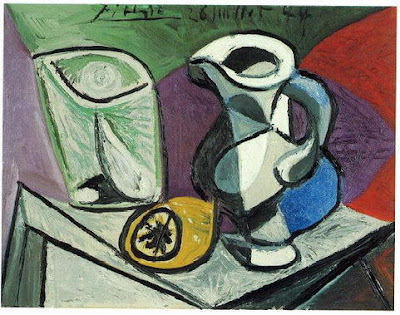 The news came as a surprise: The on 6 February 2008 in Switzerland, Picasso paintings stolen from the Sprengel Museum Hannover - "Verre et Pichet" (1944) and the late work "Tete de cheval" (1962) - have been "secured" in Serbia.

Hanover. This message is sent to the senior prosecutor of the Swiss law enforcement authorities, Charles Fässler, on the screen - on Friday evening in the show "10 to 10" on Swiss television.

After three and a half years' hard work determine "whether the prosecutor's office, authorities and" third party "succeeded in making the images identified. The value of the still life and the horse's head are now estimated at 4.8 million francs (the equivalent of € 3.88 million). The pictures are befänden unharmed at a "safe place". Among the offenders, the prosecutor made so far but no details.

The apparent breakthrough came only in recent days. According to the information Fässler the Swiss prosecutor investigating Christina Mueller had recently traveled with representatives of the cantonal police to Belgrade to negotiate. When international wanted also the prominent British art detective Dick Ellis has been active. The former Scotland Yard sergeant will also be traveling to Serbia and Montenegro. He was involved in the past on numerous spectacular searches, such as the search for Edvard Munch's "Scream" from the National Gallery in Oslo. In connection with the search for the stolen Picasso paintings is Ellis also came to Hanover for talks, said Ulrich Krempel, Director of the Sprengel Museum.

The fact that the Hanoverian art in the former Yugoslavia have appeared, invites speculation. Tried to sell the underworld bosses, the museum works to wealthy collectors in Eastern Europe? Do the investigators for the return of the photos "ransom" to pay? Infected as in the case of the spectacular 1994 robbery Schirn even the Serb mafia behind the theft in the cultural center in Pfäffikon causeway, where the loans from Hanover in a Picasso exhibition hung?

Stefan Horsthemke, to charge recently at Axa Art, where the Picasso works were insured, said on request ". Are up to no pictures arrives back safely to Hanover, it is too early to talk about the background" The insurance has been before some time to the victims - the city of Hanover and the Sprengel Foundation - a total of around three million euros paid. Typically, in exchange for the emergence of looted paintings, the sum insured against art.

Clutter on the weekend showed confidence that the works are soon back in the museum. "We are pleased that the investigators have been able to find the Picasso painting. We know that it's the pictures well. The most important thing now is that they are quickly back, "said the museum director. The artworks were intact, showing only one frame damage. The take-back should be handled by Switzerland. The Swiss prosecutor's office has asked the Serbian authorities for legal assistance.

Angela Kriesel talked of the Sprengel Foundation on Sunday from a "wonderful news". There was absolutely correct, do not invest the sum insured in other arts. Hanover Kulturdezernentin Marlis Drevermann said they had always planned for the sum of the restitution of works of art.

After speculations, which specializes in art crime, the Internet platform arthostage.blogspot.com nail-biter is not yet endured. After such a "deal" it was important that all sides kept their word. Previous cases have shown, that is to recover stolen art in Serbia and Montenegro, sometimes only if payments were made to dealers and thieves. Fässler prosecutor said: "Whether money is flowing, we do not know."

"There have been various theories, such as the rich billionaire who has given the theft in order," said Clutter. "We have always assumed that it is an absurd step, things to steal from the public domain. . The images are known and listed in the Art Loss Register, "The likelihood that the works appeared again, whether from the beginning been considered to be high:" All the people who deal professionally with the subject of art theft, told us that the chance that the images are found, is big. "he had more background, the Swiss prosecutor does not reveal, said Carding. The circumstances remind the museum director at the Schirn robbery of 1994. The author and art theft expert Stefan Koldehoff ("Aktenzeichen art") also sees parallels between Pfäffikon-robbery and the Frankfurt case, as he told this newspaper on request.

Even when prey are Schirn art - two and a Spitzweg Turner from the Tate in London and the Hamburger Kunsthalle - returned from the former Yugoslavia. However, there were only five years after the first serious evidence.

Art museum professionals from London and detectives then went to work smart - and they succeeded. The individual quibbles, however, are not without controversy. The Tate in London is said to have earned the coup, a 20-million-euro surplus, at the expense of art insurer. Meanwhile, there are books on the Frankfurt case, but many details remained silent until today.

Shortly after Picasso theft in 2008 Pfäffikon had been stolen in Zurich's Buehrle collection of four paintings with an estimated value of 180 million francs (145 million €). Two appeared again soon after. Of two other works - a Cézanne and Degas - remain missing without trace. It is still unclear whether the perpetrators of Pfäffikon for the robbery in Zurich are responsible.

A successful result was recently the case in 2010 from the then inadequately secured Musée d'Art Moderne in Paris reported stolen works of art with an estimated value of around 100 million €. A few days ago were arrested three suspects in Paris - the art works were not yet tracked down.

Marshall Ronald, the aquitted Lawyer who recovered the Da Vinci Madonna of the Yarnwinder offers this as a breakdown of the Buy-back:

"Lets spell out in clear terms the truth behind buybacks.

The insurance industry would have you believe that buybacks are unlawful and that the owner and those involved in the buyback become susceptible to arrest.

Dick Ellis and Mark Dalrymple would have you believe that you could be charged with conspiracy to launder money.

The insurance industry has a valid concern that they do not wish to encourage thieves to steal art simply to claim the rewards offered. That is a matter of public policy the public policy of protecting the interests of insurers.

Rewards are in the gift of the insurers and they are notoriously secretive of what they actually pay out as opposed to what they advertise as the offer of the reward prefaced with the clause subject to the usual conditions, which is basically a get out clause to make payment, shall we say, somewhat difficult.

Insurance companies are spectacularly disinterested in whether the artwork is returned or not which is in sharp contrast to that of the original owner of the artwork. The loss adjustor is appointed to protect their interests however their track record of recovery is poor.

The private sector has specialist companies often headed up by ex police officers and they work with the like of the Art Loss Register to see whether the art work surfaces. Mark Dalrymple, Dick Ellis and Julian Radcliffe are all prominent players.

The owner of the artwork is whoever has legal title and they are the people who can enter into commercial arrangements for the safe recovery of the artwork. The owner is sovereign and can deal with anyone of their choosing including if they so choose the original thieves. It is not an offence for an owner to enter into a commercial arrangement to recover or procure the return of their own property.

The owners are governed by private law and the state is governed by public law. If the owner wishes to enter a private arrangement to recover property then that is an end to the matter. Owners are not paid for law enforcement and if they elect to act privately they can do so with impunity. There is a big difference between advertising a reward and entering into a private treaty."