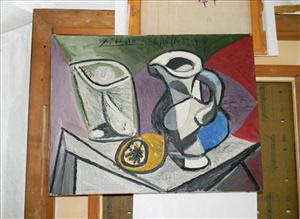 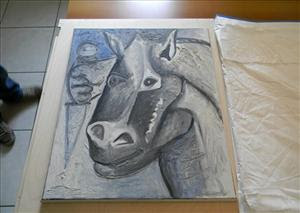 The works created by Picasso in 1962 (Head of horse) and 1944 (Glass and pitcher) are worth millions of dollars. They were stolen from an exhibition in the town of Pfaeffikon near Zurich in February 2008, and they were on loan from the Sprengel Museum in Hannover, Germany, at the time of the theft.

According to earlier announcements of Swiss State prosecutor Charles Faessler, Switzerland had sent an official request to Serbia for the paintings to be returned

Two Picasso paintings owned by a German museum and stolen from a Swiss exhibition have been found in Belgrade, Serbia's interior minister said Wednesday.
Ivica Dacic provided no information on the exact location of the paintings or possible suspects in the theft.
The works - "Tete de Cheval" ("Head of Horse") from 1962 and "Verre et Pichet" ("Glass and Pitcher") from 1944 - were stolen from an exhibition in the small Swiss town of Pfaeffikon, near Zurich, in February 2008. They belong to the Sprengel Museum in Hannover, Germany.
Police director Milorad Veljovic said authorities are still investigating who and when brought the paintings to Serbia and where they were hidden before discovery.
Belgrade media said no arrests have been made.
Dacic said the paintings were discovered in close cooperation with Swiss police. Switzerland has submitted a request to Serbia for the paintings to be returned.