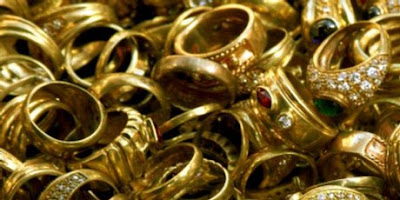 Father and son in court over hidden treasures

Police raided a storage centre in Sydney this week and made a remarkable discovery: a treasure trove of cash, jewellery and antiques worth A$6.5 million ($8.5 million), allegedly stolen by a father and son targeting homes in affluent suburbs of two cities.

The pair - likened by one detective to Dad and Dave, characters in a classic Australian comedy - are suspected of breaking into more than 200 homes and properties, cracking safes and covering their tracks so carefully that some victims had no idea they had been burgled.

Christopher See, 56, and Phillip See, 33, were arrested in Sydney this month after a detective spotted them at Melbourne's airport shortly before the final crime of their alleged seven-year spree, the theft of cash and valuables from security deposit boxes in a city storage facility.

According to the Herald-Sun, the two men - who were charged with that break-in in a Melbourne court this week - were "cat burglars" who could scale high buildings. They led quiet lives - the father lived with his aged mother while the son stayed in a cheap boarding-house - and did not associate with known criminals or splash their alleged wealth around.

The stash uncovered at the Sydney storage centre included A$4 million in cash, a large quantity of foreign currency, 120kg of silver bullion and thousands of pieces of jewellery, as well as antiques, heirlooms, precious stones, five handguns, ammunition, false identification documents and a World War I Victoria Cross.

The Acting Assistant Commissioner of NSW Police, Mal Lanyon, said the burglaries - many of them targeting homes on Sydney's leafy north shore - involved tactics so sophisticated that some victims had been unaware they had been robbed until their valuables were returned.

"They are using a method that if you were the first to walk into a room, you wouldn't realise that a break and enter had happened," he said. "We believe there may be a number of owners of both commercial and residential premises who are unaware that their safes have been tampered with ... They certainly have been prolific, the persons responsible."

Police found nearly A$40,000 of cash and valuables at the house Christopher See shared with his mother in the wealthy Sydney suburb of Bellevue Hill, the Herald Sun reported. Bellevue Hill is home to James Packer, of the publishing and gambling empire, and Lachlan Murdoch, Rupert's eldest son.

Police intercepted mobile phone conversations by the Sees during their alleged robbery of the safety deposit boxes. They allegedly bought specialist power tools enabling them to break into the strongroom.

After being arrested on December 19, the men were extradited to Victoria, where they were wanted on outstanding warrants. They have been remanded in custody until March 19.

One police source told the Herald Sun: "They don't gamble or take drugs. The dad lives with his old mother and drives a cab part-time, and the son lives in the cheapest boarding house you could find."

IT is not unknown in policing circles for a stroke of good luck to be claimed as "good detective work".

But not in this case.

The arrest of two men alleged to be the most prolific burglars Victoria has ever seen - or not seen - had little to do with luck and everything to do with long, dogged detective work.

It also seems to have been a case of interstate police co-operation - something that can't be taken for granted.

When "the double-storey house burglars" first appeared on Page 1 of the Herald Sun on October 11, 2005, they had been credited with at least 140 burglaries in Melbourne suburbs from Keilor to Doncaster.

They stole only cash and jewellery, mostly from big two-storey homes.

Their haul was then believed to be more than $4 million.

One burglar was agile enough to scale walls to upstairs rooms.

By the time Melbourne's "Spider Man" burglar was finally unveiled in the Herald Sun on April 23 this year, the tally of stolen cash and jewellery was estimated to have reached $15 million.

By then the thieves were believed to have broken into more than 400 homes of Melbourne's affluent.

The targets had spread to include Kew, Balwyn, Camberwell and Brighton, but the signature was the same.

Walls and drainpipes were scaled, alarm systems and CCTV cameras disabled, and safes opened in bedrooms while families were asleep nearby or eating.

On February 15, in the back yard of a house in Kew, detectives finally got their stroke of good fortune: a burglar was fleetingly caught by a security camera.

Two months later, detectives had been unable to identify him and so they went public.

But wide publicity drew little public response, which confirmed the suspicion of some detectives that they were looking for an interstate "fly-in" team.

The publicity extended to Sydney, where police believed the Melbourne burglars' methods were similar to those of a successful team in wealthy Sydney suburbs.

Even more significantly, the NSW detectives had a name - "an outside, maybe chance", they told their Boroondara colleagues who had worked almost full time on it for eight months.

Details of what had been known at Boroondara as "Operation Trapeze" were kept close to police chests yesterday. But the key development was the all-night raid on an Ivanhoe storage centre this month.

Until then, detectives told the Herald Sun, Spider Man had "stopped cold in Melbourne from the day the article was published at Easter".

The Ivanhoe job made them feel they were closing in.

The next stop was another trip to Sydney - this time with an extradition warrant.

"It was a long haul and a lot of hard work," said one detective yesterday.