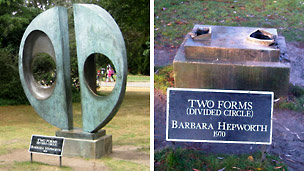 Barbara Hepworth's granddaughter has increased a reward to £5,000 to find the sculpter's bronze artwork which was stolen from a south London park.

Dr Sophie Bowness said she hoped the money would help in the search for Two Forms (Divided Circle) sculpture.

Southwark Council had offered a reward of £1,000. It is thought the artwork was stolen by scrap metal thieves.

Councillors have since urged the government to pass legislation to crack down on scrap metal theft.

Dr Bowness, a trustee of Barbara Hepworth's estate, said: "In support of Southwark Council's efforts to recover Barbara Hepworth's Two Forms (Divided Circle), the Hepworth Estate have offered to increase the reward for information to £5,000.

"This is a much-loved and irreplaceable bronze, and its position in Dulwich Park is one that Barbara herself particularly admired when she saw it in 1970."

A life-size bronze statue of former MP and social reformer Alfred Salter was also stolen from Southwark some time ago.

Southwark Council is carrying out a risk assessment of 165 pieces of public art and sculpture in its area and is also considering temporarily removing valuable pieces or installing CCTV to monitor them.

The leaders of the Labour, Conservative and Liberal Democrat groups on the council have written to Prime Minister David Cameron asking him to bring in "tough" new laws.

In a statement, they said: "We believe there should be much tougher regulation of the industry including a ban on cash payments to sellers and a requirement that dealers keep a log of sellers' details."