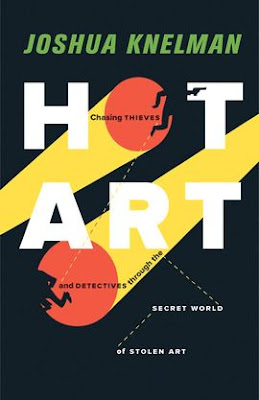 Inside the secret world of stolen art

Journalist Joshua Knelman delves into a much-mythologized realm of theft in his book, Hot Art

Imagine an art thief and whom do you picture? A wily and debonair connoisseur who steals masterpieces for his private delectation?

That’s what journalist Joshua Knelman had in mind when he followed up on a small art theft in Toronto, thinking of a real-life Pierce Brosnan admiring his ill-gotten Monet.

But after he spoke with some of the handful of detectives worldwide who are art-theft specialists, civilian experts on the subject and even a charismatic ex-thief, Knelman discovered the truth was far more interesting. Six years later, he’s published Hot Art: Chasing Thieves and Detectives through the Secret World of Stolen Art (Douglas & McIntyre).

Although thefts of works by Vermeer or Munch or Van Gogh get the international headlines, they form just a small part of one of the biggest black markets in the world.

"Famous artworks are about 5% of the art stolen," Knelman says. One of his contacts (a former thief) calls them the ‘headache cases’ because they’re so difficult to dispose of. Nonetheless, the money involved is staggering, even if no one knows the exact figure. And despite the millions of dollars involved, there are surprisingly few police officers investigating art theft, a speciality that requires an interest in art and a willingness to spend years on individual cases.

"There aren’t many people tracking art theft," Knelman says. "In Canada, we have an art-theft unit in Montreal, and there’s one in Los Angeles, but those are secondary art markets. There’s nothing in New York or Toronto.

"Every detective in the book says their main priority is recovery. Arrest is secondary," he adds. "They all think of it as an epic game of hide-and-seek, with recovery years later in a different country."

Knelman discovered that a lot of the art stolen from private homes, art dealers and museums eventually winds up in respectable galleries.

The criminal market for art relies on legitimate dealers, whether innocent or complicit. The art business deals in discretion and gentlemen’s agreements. One expert told Knelman that the art market reminded him of drug deals in East L.A. — no paper trail, just cash and personal relationships.

And what of Thomas Crown?

"It’s a beautiful myth," Knelman says. "It’s seductive. It plays to our romanticism. Anyone can sympathize with stealing things because they’re beautiful.

"That was the story I was hoping to write," he adds. "But the reality is so much more mysterious and complex. I started out writing a short piece and ended up overturning that myth."