Stolen Art Watch, Leonardo Da Vinci Madonna of the Yarnwinder Intoxicating As Ever !! 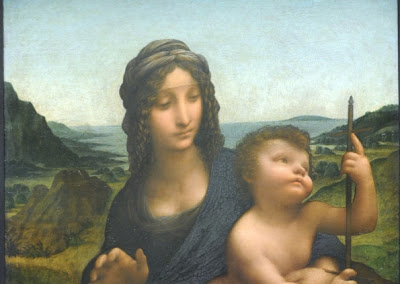 BRITAIN’S leading Leonardo da Vinci expert has spoken out over the “deeply unsatisfying” result of the trial of five men, arrested in the recovery of Scotland’s only painting by the artist three years after it was stolen.

Martin Kemp, a former University of St Andrews art historian with nearly 50 years’ work on Da Vinci behind him, was an expert witness in the two-month court case.

It ended last year with all five defendants cleared of an extortion plot to extract £4.25 million for the return the Madonna of the Yarnwinder.

“I thought it was deeply unsatisfactory. I’ve been involved in three major court cases as a witness,” he told The Scotsman. “My view is that the full story hasn’t come out. There is still a lot more to be unearthed.”

Mr Kemp has co-authored a new book about Da Vinci’s Madonna of the Yarnwinder, long owned by the family of the Duke of Buccleuch and a similar one owned by a New York collector.

In it he concludes the two paintings were worked on in Leonardo’s studio at the same time in about 1501 – though art critics have long argued over the two works, and which is better authenticated.

The Buccleuch Yarnwinder, showing Mary with the Christ child holding a winding stick for yarn, is a star exhibit in the exhibition, Leonardo da Vinci: Painter in the Court of Milan, at the National Gallery in London.

The once-in-a-lifetime show of Da Vinci works, which ends in early February, has brought huge crowds and reports of touts selling advance tickets for hundreds of pounds.

Yesterday, the duke told The Scotsman that he hopes the painting will return direct from London to go on show again at the National Gallery of Scotland. It went on display there in 2009 after its recovery.

“The London exhibition ends in February, my hope is that she will come almost immediately back to Edinburgh,” he said.

But the duke said he is also eager to see the picture hang again in Drumlanrig Castle in Dumfriesshire, from where two men armed with an axe stole it in a daylight raid in 2003.

It was almost a “point of honour” marking the huge effort by the Dumfries and Galloway Police to get the painting back, he said, but security was a major issue. “I’m very keen that she should be back there. At some point, during the summer opening season, next year,” he added.

“It’s an instinctive feeling, that whoever perpetuated the theft, and we don’t know who it was ultimately, shouldn’t so disrupt everything that the picture is never seen there again.”

Mr Kemp said he has had three queries a week recently from people who believe they have a Da Vinci, along with conspiracy theorists who think they have solved bizarre mysteries of the Mona Lisa or other works.

It was “part of the Leonardo insanity that has been escalating since the 19th-century”, he said. “He does attract a following and corresponding levels of lunacy,” he said. “I’m besieged on a daily basis by the Leonardo loonies.”

His book, Madonna of the Yarnwinder, a historical and scientific detective story, is the latest of several on the painter.

With the Buccleuch painting, Scotland is uniquely privileged in having a Da Vinci, he said, with only about 20 paintings accredited to him.

But it is becoming increasingly difficult to stage exhibitions, he said. “The difficulty now is to get the loans. There are things in the National Galleries exhibition that won’t travel again.”

Owners, are being asked to show works again and again, and he has seen drawings suffering from light exposure during his career, he said.

The Buccleuch Yarnwinder was described in the National Gallery’s exhibition catalogue as a work “devised and to a great extent executed by Leonardo” with help from other hands in his studio. Praised for its “warm, softly blurred colours and the strongly accented, beautiful controlled passages of light and shade”, it is thought to be worth £60 million.