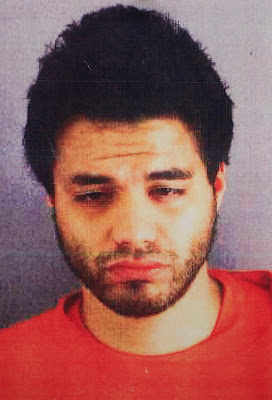 ​Mark Lugo, the Hoboken wine steward accused of a number of art thefts including that of a $275,000 Picasso sketch in San Francisco, is due to be arraigned in New York today. Lugo just finished a 138-day sentence in California for the Picasso; the arraignment in New York is related to two art heists at Manhattan hotels, according to the AP's source.

Lugo became a suspect in several art thefts in New York after the San Francisco crime, in which he walked into the Weinstein Gallery, casually took the drawing "Tête de Femme" off the wall, and moseyed out into a taxi.

Police found about $500,000 worth of stolen artwork in Lugo's Hoboken apartment, including another stolen Picasso. It was all displayed prominently.

In New York, the charges against Lugo include the theft of a $350,000 Fernand Leger drawing from the Carlyle Hotel, and the theft of five works by South Korean artist Mie Kim from the Chambers Hotel, each worth $1,800.

It's not known whether Lugo has a lawyer in New York or whether the New York investigation will continue into other crimes he's thought to be related to.

NEW YORK (AP) — A wine steward suspected in a bicoastal art-theft spree lifted pricey art from New York hotels simply by walking out with the works in a canvas tote bag and then used them to line his own walls, prosecutors said Friday.

Mark Lugo, who just spent more than four months in jail for grabbing a $275,000 Picasso off a San Francisco art gallery wall, was being held without bail after pleading not guilty Friday to grand larceny and other charges in a Manhattan court.

"In an effort to display stolen art in his apartment, this repeat art thief boldly walked out of two Manhattan hotels in broad daylight" with valuable works, District Attorney Cyrus R. Vance Jr. said in a statement.

Lugo's New York lawyer, James Montgomery, said the 31-year-old was a "pleasant, engaging" man "who's been struggling with particular difficulties," which he wouldn't detail.

"When the dust settles, and the DA's office calms down a little bit, we'll find that Mr. Lugo is a man who had no commercial motive at all" in the alleged thefts, Montgomery said.

The charges relate to two thefts of a total of six artworks, including what prosecutors called a $350,000 sketch by the French Cubist painter Fernand Leger. But prosecutors said a search of Lugo's former apartment in Hoboken, N.J., turned up four other pieces — including a Picasso work — that may have been stolen from Manhattan venues, and they said the investigation was continuing.

Lugo was publicly identified as a suspect in several New York heists since shortly after his July arrest in San Francisco, where police identified him as the man who walked into the Weinstein Gallery, lifted the 1965 Picasso drawing "Tete de Femme" ("Head of a Woman") off the wall, strolled down the street with the sketch under his arm and hopped into a taxi. Police tracked Lugo to a friend's Napa County apartment, where the Picasso was found unframed and prepared for shipping.

At his Hoboken apartment, investigators then found a $430,000 trove of stolen art, carefully and prominently displayed, as well as high-priced wine, authorities said.

Among some 19 artworks at the apartment was Leger's 1917 "Composition with Mechanical Elements," Assistant District Attorney Meghan Hast told a judge. The drawing disappeared June 28 from an employee entrance area at a gallery in the Carlyle Hotel; prosecutors pegged its value at $350,000, though Montgomery said that figure warranted investigating.

Lugo also is charged with stealing a group of five works by the South Korea-born artist Mie Yim, known for her disconcerting images of toy bears and other toy-like creatures, from the Chambers Hotel on June 14. The hotel had bought the Yim works, together called "Pastel on Board," for $1,800 apiece, prosecutors said.

The San Francisco district attorney's office has said Lugo also was suspected of several other New York art heists, including the theft of a $30,000 Picasso etching from the William Bennett Gallery on June 27.

The sometime sommelier and kitchen server at upscale Manhattan restaurants also is charged in New Jersey with taking $6,000 worth of wine - in the form of three bottles of Chateau Petrus Pomerol - in April from Gary's Wine and Marketplace in Wayne. He hasn't appeared in a New Jersey court yet to answer those charges.

Lugo pleaded guilty in October to grand theft for the San Francisco heist. He finished his 138-day sentence Nov. 21 but was being held until he could be transferred to New York.

Lugo's San Francisco attorney, Douglas Horngrad, has called him "more like someone who was in the midst of a psychiatric episode" than a calculating art thief.