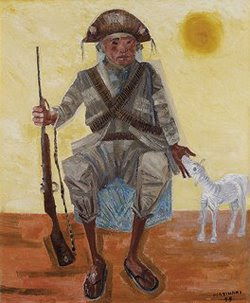 http://www.laht.com/article.asp?ArticleId=334643&CategoryId=14090
SAO PAULO – The artworks stolen over the weekend from a private collection in Sao Paulo have been returned, Brazilian police said on Wednesday.

The paintings by Brazilian artists Candido Portinari, Tarsila do Amaral and Orlando Teruz were stolen on Sunday by a group of heavily armed men.

Portinari’s “O Cangaceiro” and “Retrato de Maria,” Do Amaral’s “Figura em Azul” (1923) and Teruz’s “Crucificaçao de Jesus” were left by the railroad tracks near the offices of the TV Record network, police said.

The television network’s security guards were told by an anonymous caller exactly where the paintings had been left and immediately notified police.

The paintings, which are worth some $1.4 million, will be examined by an expert to make sure they are authentic.

Police found a bag next to the paintings that contained jewelry that was also stolen Sunday from the residence of a hotel industry executive.

A group of about 20 heavily armed men wearing police uniforms pulled off the heist in Sao Paulo, police said.

A man appeared at the front door of the property bearing Mother’s Day flowers for the owner, and the other armed men then ran inside and subdued the seven people in the house.

The thieves, who were in the house for 90 minutes, took the paintings, cash, jewelry and other valuables.

The paintings do not appear to have been damaged, police superintendent Mario Palumbo Junior said.

In January 2008, police recovered “Portrait of Suzanne Bloch” by Picasso and “Coffee Laborer” by Brazilian Candido Portinari, which had been stolen from the Sao Paulo Museu de Arte.

The artworks, which included the 1933 Picasso engraving “Minotaur, Fountain and Women,” were all recovered within two months.

The Picasso etching was found abandoned beside a highway on the west side of Sao Paulo, Brazil’s largest city. EFE
Art Hostage comments:
Apparently there was money owed by the victims in this case and now this debt will be paid back the stolen art has been returned.
A family dispute gone too far.
Posted by Art Hostage at 12:58 pm