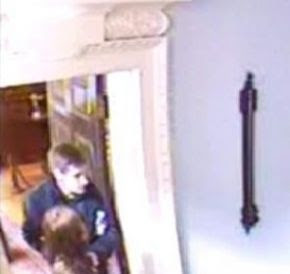 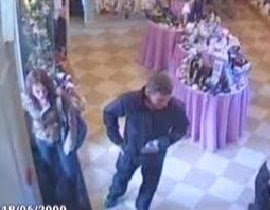 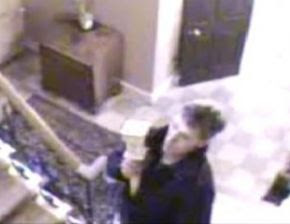 Police are casting the net wider in their hunt for a pair of antique thieves who were caught on CCTV as they nabbed a valuable baromometer from a wall in Yorkshire.

Police are hoping a member of the public will recognise the thief who removed the 18th Century ivory barometer from Fairfax House in York.

A man and a woman were caught on CCTV taking the 3ft barometer and police are appealing nationwide for help in identifying the offenders as it is believed they could no longer be in the
area.

The man is described as white, slim build, aged in his early 30’s, 5ft 9” tall with a dark complexion and dark curly hair. He was wearing a dark coloured jacket and trousers.

The woman is white, of slim build, similar height to the man, with dark, wavy shoulder length hair. She is described as being aged in her early 20’s.

It is thought pair may have visited Kiplin Hall in Richmond, North Yorkshire, a week prior to the theft at Fairfax House.

AN ANTIQUE weather forecasting instrument which was stolen by visitors from a York tourist attraction has now been valued at £150,000.

The ivory and brass-plated barometer – part of Fairfax House’s Noel Terry Collection of English Furniture and Clocks – was stolen from the York Civic Trust-owned museum, in Castlegate, on Monday, May 18.

It is thought that the couple captured on CCTV casually unscrewing the Daniel Quare instrument from the wall may have visited Kiplin Hall in Richmond, North Yorkshire, a week prior to the theft.

Detectives said the pair walked into the museum at about 2.45pm and soon after removed the weather monitor from the wall, with the man then hiding the three-foot long device under his coat.

North Yorkshire Police have issued a appeal nationwide for help in identifying the offenders as it is believed they could no longer be in the area.

The man is described as white, of slim build, aged in his early 30s, 5ft 9ins tall, with a dark complexion and dark curly hair. He was wearing a dark coloured jacket and trousers.

The woman is white, of slim build, in her early 20s, and of a similar height to the man. She has dark, wavy shoulder-length hair.

A “substantial” reward has been offered by Fairfax House’s insurers, Axa, for information leading to the barometer’s safe return.

A spokeswoman for Axa said: “It is our hope that by offering a reward, information will be provided which will lead the authorities to recover the barometer and for it to be put back on display in its rightful home.”

Art Hostage Comments:
-
Interesting to note, the Irish Pink Panthers regard themsevles as
"Fun Loving Criminals" and have adopted a signature tune that goes:
-
"Running around robbing art all whacked up, Scooby snacks"
-
see video here: http://www.youtube.com/watch?v=C1u5Yir0E5Y
-
Art Hostage vindicated in the valuation of this unique Daniel Quare barometer.

The usual bull shit put out after an art theft has been thwarted on this occasion.
Remember how they tried to play down the value of the Daniel Quare barometer and only say perhaps "tens of thousands ???"
Remember Art Hostage commenting the true estimate should read hundreds of thousands ??
Well, now they reluctantly admit a value of £150,000, when in fact the true market figure is £500,000.
Remember Art Hostage said the thieves are part of the Irish Pink Panthers and they are working from a target list ???
Remember Art Hostage said the thieves would be long gone and did not care about their identity as they were not British, but Irish ?
Art Hostage has heard Underworld whispers about this only being an appetizer and the main course art theft will be served between now and August 31st 2009.
-
The Main course will be an art theft of such high magnitude it will rock the establishment and trigger a cross border Police effort.
However, why wait until then and act reactively ????
Also, the whisper from the Underworld is whilst waiting for the Main course art theft, there will be several sorbets to keep authorities busy.
No specific details have been mentioned but Art Hostage has been told it will be abundantly clear when the Main course art theft occurs.
Upon another note, notice how vague the reward offer is ???
Word is the insurers are looking at a figure of £10,000, however, the value of the stolen Daniel Quare barometer within the underworld is reputed to be £25,000, or if used as collateral, £50,000 worth of drugs.
Anyone attempting to negotiate the return of the stolen Fairfax House Daniel Quare barometer will be asked for proof of life, then they will be ordered to go through with the recovery and set up those handling the Barometer.
If the negotiator refuses to participate then they will be threatened with prosecution for demonstrating control, by being able to produce proof of life.
Moral here is to stay clear and do not try and negotiate the return of the barometer unless you are an ex-policeman or freelance undercover officer working for S.O.C.A.
-
Leave the investigations to the Police, who after all, get paid very well indeed to do their job.
The only deal available is for someone with inside knowledge to become a Registered Police Informant and set up those involved in the theft and subsequent handling.
If there is a recovery, and if the thieves and handlers get convicted, then and only then will the insurers consider paying a reward.
The amount of reward paid is up to the insurers, is not negotiable and demands for a higher figure will be treated as blackmail and an extortion attempt.
So, to recap, if you have got inside information and want to become a Police Informant, contact police and begin your nightmare journey.
At the end of the whole process, sometime in about two years, the Police informant may, I repeat may, get around £10,000.
An investigator was overheard saying:
-
"If it wasn't for that pesky Art Hostage, we could use our usual bull shit and recover the barometer using a sting operation and without paying any reward"
-
Art Hostage replies;
Scooby Dooby Do !!!!!
-
Update:
-
Sad news if true, Michel Van Rijn arrested
-
Art Loss Register recovers stolen artifacts from New York Auction house. These were stolen in Holland in 2007 and proves yet again the Art Loss Register has slammed the door closed on selling stolen art through auction houses, worldwide.
-
Selling Stolen Art at Auction, Forget About it !!!!!
ICE recovers Egyptian artifacts stolen from a museum in the Netherlands

NEW YORK - U.S. Immigration and Customs Enforcement recovered seven artifacts of Egyptian origin that were found at a Manhattan auction house. The cultural heritage items were stolen from the Bijbels Museum in Amsterdam on July 29, 2007 in the middle of the afternoon. Dutch police contacted ICE to assist in the recovery of the artifacts on their behalf.

The investigation received significant help from the Art Loss Register (ALR) of New York, an organization that maintains a database of stolen works of art. The ALR discovered the artifacts at the Manhattan auction house, which turned the artifacts over to the Register and ICE agents.

One of the pieces recovered is a 7-inch-high depiction of a mummy with arms folded over the chest and hoes in each hand. It dates to between 1307 and 1070 B.C. The other recovered artifacts were an bronze figure of Imhotep, artchitect of the first pyramid, and one of Hapokrates, and an Egyptian painted Wood Osiris, all dating as far back as 712 B.C.

"The recovery of these artifacts sends a strong message to thieves that the market to sell stolen antiquities in the United States is freezing up." said Peter J. Smith, special agent in charge of the ICE Office of Investigations in New York. "ICE is committed to working closely with foreign governments and organizations like the ALR to recover priceless works of art and antiquities so they can be returned to their rightful owners."

ICE, the largest investigative agency of the Department of Homeland Security, handles investigations into cultural artifacts that show up on the world market.
-
That reminds me, wonder if there has been any enquiries at the art loss register about the stolen Cavalier Van Mieris painting taken from the New South Wales gallery in Sydney ??
-
Word is from DC the Cavalier could be in play !!
Posted by Art Hostage at 2:32 pm