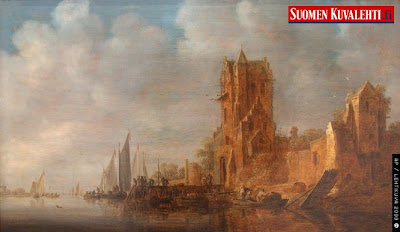 City spokesman Mark de Kok says three of the stolen paintings were river scenes by Jan van Goyen, a Rembrandt contemporary. The others were a 17th century painting by Pieter de Neyn and 19th-century pieces by Willem Roelofs and Adrianus van Everdingen.

De Kok said two more paintings were damaged at the museum in Ijsselstein when the thieves dropped them as they escaped. He said the burglary took place at 3 a.m. Monday when thieves broke through an emergency door with an iron bar.

Police are reviewing security cameras that may have captured the burglary.

It was the second art heist this month in the Netherlands.
Art Hostage comments:
I must admit I saw this coming, not the specific museum, but talk has been a cluster of planned art thefts in Holland and Belgium.
Speaking to a contact, close to the European art crime scene, it is not surprising as those involved now work on the principal of once bitten twice shy.
The reasons for these art thefts and the destination of the stolen artworks are filtering through.
-
Interesting to note these art works were part of an exhibition and were not part of the permanent collection at this small museum. Thieves waited until the works were gathered and then struck.
-
Coming soon the biggest art theft of 2009, or so I am told.
No specific details yet.
to be continued..............................
-
List of stolen Dutch riverscenes:
Stolen paintings belonging to the ICN collection:

From the collection of the Centraal Museum Utrecht is stolen:

Two paintings from the ICN collection are damaged:

Salomon Jacobsz.van Ruysdael: River View with passengers in a coach