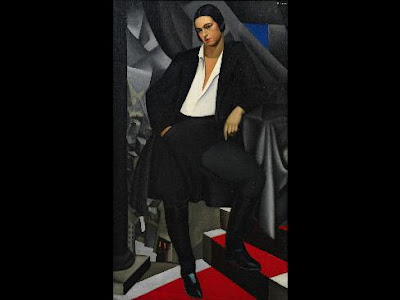 
http://www.bloomberg.com/apps/news?pid=20601088&sid=afgJN16TugQQ
May 4 (Bloomberg) -- Wolfgang Joop, the German fashion designer, will sell 10 paintings by the Art Deco artist Tamara de Lempicka, with a total top estimate of $18.6 million, at a Sotheby’s New York auction this week.

Among the works on offer in the May 5 and 6 sale are a portrait of Duchesse de la Salle in a manly suit, and one of Marjorie Ferry, draped in white cloth like a Greek statue. Both paintings have top estimates of $6 million. Joop, 64, said by e- mail that he has decided to stop collecting and instead wants to concentrate on creating his own art.

“In my 2003 autobiographical novel ‘Im Wolfspelz,’ I have my main character Wolf in his New York penthouse being asked by a Tamara de Lempicka picture, ‘Why did you buy me instead of painting me?’” Joop said in an e-mailed answer to written questions. “Now as an artist, I am investing the money I earn in my own art. My collecting years are behind me.”

Sotheby’s described Joop’s Lempickas as “the finest group of paintings by the artist ever to appear at auction.” Joop said he isn’t concerned about the timing of the sale, which comes as Sotheby’s and its rival Christie’s International cut jobs. Contemporary-art prices have dropped 30 to 50 percent during the past six months in the worst recession since World War II, according to dealers.

“In crisis times, only what is already proven can survive,” Joop said. “A Damien Hirst auction like the one in the fall of 2008 would certainly not be as successful” if it took place now, he said. Hirst’s two-day “Beautiful Inside My Head Forever” sale in London raised 111.5 million pounds ($163 million). “If I were a new collector with a big budget, I would buy Tamara.”

Lempicka was born in 1898 to a family of Polish-Russian aristocrats. She married a Warsaw lawyer with no money, and together they fled from the Bolsheviks in 1918 to Paris.

“Tamara was beautiful, strong, sexually ambivalent as well as an individualist, which attracts me,” he said. “When I design clothes, it is for this type. And the women who surround me and influence me are a little bit Tamara: pale complexions, red lips, bold expressions.”

Joop presented the first collection under his Wunderkind label in Berlin in 2004. The brand now sells in over 100 stores around the world. Wunderkind opened two boutiques in Germany and its first international shop in London last year.

The Lempicka paintings hung in Joop’s New York penthouse, though they were often away from home, on loan to museums around the world, the designer said. He began collecting them in 1978 and bought the last one in 2003.

“I whisked away the first picture, ‘Dans l’Opera,’ from under Andy Warhol’s nose,” he said. “He was a notorious penny pincher, though very rich compared with me back then.”

The 1941 portrait of a woman with flower-adorned red curls and an expansive decolletage has an estimated top price of $400,000. The lowest-priced item is “Portrait d’Evelyne P.” which Sotheby’s expects to fetch between $80,000 and $120,000.

Joop’s own art will go on display at the Kunsthalle Rostock on May 10. According to the museum’s Web site, the show includes a textile installation in several parts that will be presented to the public for the first time. Joop said he is working on “large-format tapestry pictures.”

Sotheby’s will offer four of Joop’s Lempickas on May 5 and six the following day at the New York auction.

“Every separation is painful,” Joop said. “Tamara is my soulmate and it was love at first sight. From 1978 to 2009, we lived together for a while.”

To contact the writer on the story: Catherine Hickley at chickley@bloomberg.net.
-
Art Hostage Comments;
-
Has anyone alerted Dirk Scheringa and his wife to this sale ??
-
If so, then expect them to purchase at least one De Lempicka which can be used as a replacement until the return of the De Lempicka, La Musicienne, stolen last week from the Scheringa Museum for Realism in the North Holland town Spanbroek, which houses the Scheringa Art Collection.
Posted by Art Hostage at 2:05 pm