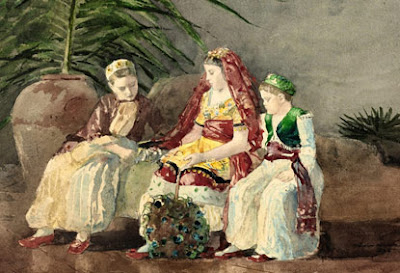 Antiques Roadshow painting sale halted after claim it was stolen

The sale of a £100,000 painting, which surfaced during an Antiques Roadshow recording at Althorp House, has been halted at the last minute amid claims it was stolen.

Sotheby's was due to auction Winslow Homer's Children under a Palm Tree last week at its New York auction house but the painting was withdrawn following an appeal by Simon Murray, the great, great grandson of Sir Henry Arthur Blake.

Mr Murray claimed the painting was given to Sir Henry during his tenure as Governor of the Bahamas, and that it depicts Sir Henry's children.

The work of art, painted in 1885, was found in a tip in Ireland about 20 years ago after allegedly being stolen from the nearby Blake estate, Myrtle House. It only resurfaced last summer when the BBC visited Althorp House to record Antiques Roadshow.

A spokesman for Sotheby's said every precaution had been made to make sure the painting had not been stolen, and added the family was given "every opportunity" to claim the piece since it was brought to them in March.

He added: "Extensive checks were carried out to ensure the painting was not stolen."

Sotheby's said the family would now have to provide "documentary evidence" that the watercolour had been taken from their estate.

There was no suggestion that the vendor was responsible for the alleged theft. He apparently found the painting while on a fishing trip near Cork, and his daughter approached Sotheby's in March looking to sell it on.

How it came to be on a rubbish tip is not known.

During the Althorp recording, BBC expert Philip Mould picked out the painting, before noticing Homer's signature. Works by Homer, considered to be one of America's greatest 19th century artists, have fetched as much as £2million at auction.

Sotheby's halts auction of their ‘stolen’ painting from fly tip

http://www.thisislondon.co.uk/standard/article-23696902-details/Sotheby%27s+halts+auction+of+their+stolen+painting+from+fly+tip/article.do
A £100,000 painting is at the centre of a dispute between Sotheby's and the descendants of a British colonial officer.

Winslow Homer's Children Under a Palm Tree was withdrawn from sale minutes before going under the hammer at Sotheby's in New York yesterday.

The sale was halted in an eleventh hour appeal by Simon Murray, the great, great grandson of British colonial administrator Sir Henry Arthur Blake. Sir Henry was given the 1885 painting of his children by the artist during his tenure as Governor of Bahamas.

Mr Murray, 34, a lawyer who lives in the City, claims the painting, which appeared on Antiques Roadshow last year after being found in a fly tip in County Cork in Ireland 20 years ago, had initially been stolen from his family estate nearby. The BBC programme's art expert spotted that it was signed by Winslow Homer, a renowned American landscape painter, and was worth £100,000.

Sotheby's said that, after the watercolour was brought to them in March, the family was given “every opportunity” to claim it. The painting is now in limbo until the auction house is given “documentary evidence” it was stolen.

Mr Murray says his mother Shirley Rountree, 60, who still lives in the family estate Myrtle House, had never been contacted by Sotheby's and only realised the heirloom was being sold on Tuesday after reading a newspaper article about the auction.

Mr Murray said: “She was distraught. She didn't know they were selling this painting. They did contact the family but gave a wrong number. They should have made a better effort. As we are concerned it belongs to us.”

Mr Murray said that Myrtle House suffered several break-ins in the early Eighties when the painting was found on a rubbish tip a mile away by a man who was on a fishing trip. His daughter approached Sotheby's in March.

Mr Murray says he was fortunate to have been in New York this week, so when he received the call from his mother was able to go in person to Sotheby's Manhattan auction house and stop the sale. He added: “Hopefully we can take back what is ours.”

A Sotheby's spokesman said that “extensive” checks were carried out to ensure it was not stolen and that no evidence has been presented.

The "found in a rubbish dump on a fishing trip to Cork" is a total fabrication to disguise the fact the person knew all along this was a stolen painting and it shows the Irish Pink Panthers have a long history of art theft.

First of all the painting was stolen then transported over to the UK mainland, where it was sold to the present owner who put it away until he thought he could cash it in.

To try and appear honest and innocent he sent his daughter to a filmed antiques roadshow.

Craftily he had it sent to the New York offices of Sotheby's and then just before the auction it was pulled.

However, authorities were on to this painting and were waiting for it to appear before it would be snatched back.

Cloak and dagger at work here.

What a coincidence the former owner, from Ireland, just happened to be in New York the day before the sale of the painting !!!!

This has all the hallmarks of an undercover effort by Julian Radcliffe of the Art Loss Register, pulling the strings behind the scenes to recover this stolen £2 million Homer painting.

Will the settlement involve the sale of this picture ???

Will any settlement involve payments to the stolen art handler who said he found it in Ireland on a Fishing trip ???

Will the Art Loss Register get paid their tribute ?????

All may be revealed in due course, especially if the painting is sold.

Still, this is yet another example of historic links to art theft by the Irish Pink Panthers and no doubt more 20 year old stolen art may surface in the near future.

Upon another note, during the Irish conflict tourists who went to Ireland on fishing trips and had not caught much, were often offered a hand grenade to use so they could throw it in the river or lake and collect the stunned fish and boast of a big catch.
Strange how a military conflict could benefit tourists who fish !!!!
Posted by Art Hostage at 6:48 pm

What are you talking about? I think you need to be sure of the facts before you publish such utter nonsense on the net.
You are clearly uninformed and full of silly little conspiracy theories. I think Greasy Murray's mother would know if a watercolour was stolen, seeing as it is (suddenly) of such importance to the family, and have reported it to the Police many years ago. Funny how a lawyer-son can so easily change the story around. Go back and check the facts - you're backing the wrong horse.

we agree there has been no evidence that this picyure was stolen.

where is the police report. did the family claim the insurance
they could not even offer a fifty fifty deal, they wanted money at first now they say they want to keep the family.
I think I would belive sotherbys when they said they contacted the family. the blake are just greedy "£%$%%

Selina Varney seems like the greedy one. If she was offerred 30% she would of done alright. Now she is costing the UK tax payer in Lawyers fees for her claim to the painting. She didn't like it also until she knew how much it was worth.

My great gran was an artist. My mum has her portfolio, I have looked through it once in 20 years. I dont think it has much value, but I wouldn't throw it away.

Give up your claim for whats not yours.

The painting should go back from whence it came. This family have no right to keep it...The fact's, you do not know the facts!