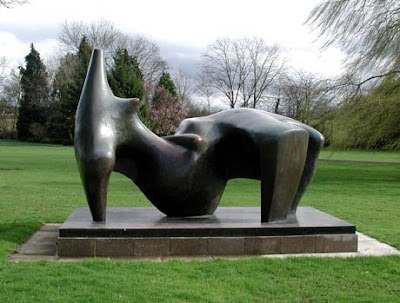 http://www.guardian.co.uk/artanddesign/2009/may/17/henry-moore-sculpture-theft-reclining-figure
Sculpture worth £3m was melted down and then sold off as scrap for just £1,500, say police

Mark Townsend and Caroline Davies
The Observer, Sunday 17 May 2009
One of the most audacious British art thefts, the disappearance of a two-tonne Henry Moore sculpture worth £3m, has been solved by police, who believe that the internationally revered Reclining Figure sculpture was melted down and sold for no more than £1,500.

The bronze sculpture was stolen from the 72-acre estate of the Henry Moore Foundation in Much Hadham, Hertfordshire, in December 2005. The theft baffled art and crime experts and sparked a global hunt for the culprits.

Police feared at first that it had been stolen to order, but investigations suggest it was taken by a group of travellers from Essex and that the metal may have ended up feeding China's growing demand for electrical components.

Detective chief inspector Jon Humphries, of Hertfordshire police, said it is believed the figure was "irreparably damaged" shortly after being taken away on a flat-bed lorry.

Inquiries indicate that the statue was moved through a Dagenham scrap dealer in December 2005 and on to another Essex scrapyard. Shortly afterwards it was shipped abroad, possibly to Rotterdam and then further east, circumventing an order to Interpol to monitor all ports for the distinctive figure.

Humphries said estimates suggested that the sculpture, three metres long and two metres high, may have made just £1,500 as scrap metal, a value that equates to just a few hundred pounds in current market prices. The Henry Moore Foundation is believed to have offered £10,000 for its safe return.

Humphries, who led the investigation, said: "We have evidence and information suggesting it was cut up on the night, then taken to a location where it was irreparably damaged before it was shipped abroad. In my mind we've managed to kill off the mystery as much as is possible."

Charles Hill, a former head of Scotland Yard's art and antiques squad and now a private art detective, added that he had been told by the notorious art thief Jimmy Johnson, whose family carried out a string of robberies at stately homes in 2005 and 2006, that a well-known group of travellers was behind the theft. Johnson alleged that the metal had been shipped to Rotterdam, then possibly to China.

Richard Calvocoressi, director of the Henry Moore Foundation, said the theft remained a "source of great regret" and that "considerable efforts" had been made to find the sculpture. Moore, who died in 1986, was renowned for his monumental, rounded reclining figures.

"Security measures have been considerably increased since the work was taken," added Calvocoressi.

The latest developments come amid a huge rise in thefts of public sculptures, up by more than 500 % in the past three years, according to Ian Leith, deputy chairman of the Public Monuments and Sculpture Association (PMSA). Police and art experts believe that although some are taken for scrap, others are targeted by black market collectors. Leith believes there is clearly an illegal art collector market, with thefts occurring on average once a month. "It is not purely due to the bronze," he said.

He added that because of the lack of an audit, local authorities and arts bodies were incapable of providing accurate information on stolen pieces. "How do we know what public art exists if we do not record what is there? There is literally a national gallery of art out there," said Leith.

The PMSA is attempting to create an online database of pieces in public places, but is hampered by a lack of funds.
Art Hostage comments:
The Henry Moore sculpture still exists and the allegation it has been melted down is pure bullshit of the highest order.
Yes, it was cut up on the night it was stolen and yes it was initially sold for scrap value.
But then the more manageable Four pieces have been stored away in three separate locations.
If all the pieces were to be reunited they could be welded back together quite easily.
However, this whole thing came about as a result of Police and Insurers refusing to allow Charlie Hill and Jimmy Johnson to recover the sculpture.
Two days after the theft Charlie Hill heard from Jimmy Johnson that the sculpture could be bought for a little bit above scrap.
Charlie Hill tried in vain to see if he could collect the £100,000 reward offered but was told he and Jimmy Johnson would be arrested if they recovered the stolen Henry Moore bronze without arrest of the thieves or the handlers.
However, don't be surprised to see another story soon about how this sculpture re-appears out of the ground.
The four pieces are held at three separate locations and will be handed back separately.
Four pieces of bronze with a £25,000 reward on each piece and you really believe the buyer melted them down, please, give me a break !!!
-
Update:
-
It is worth noting the Flatbed Mercedes truck with a HIAB crane attached, used to steal the Henry Moore bronze sculpture, was stolen specifically for that purpose.
-
However, the Flatbed Mercedes truck was worth £2,000 and the HIAB crane attached was worth £1,000, on the black market.
-
So, why bother to steal a Mercedes Flatbed truck that could be sold on the black market for £3,000, then go and steal the Henry Moore sculpture, only to abandon the Mercedes flatbed truck and sell the Henry Moore sculpture for £1500.
-
Something Rotten in the State of Den-Mark me thinks !!!!!!!!
Posted by Art Hostage at 9:00 pm

As someone involved in the vintage machinery world, I would not be in the slightest bit suprised if the bronze had been melted down as the easiest option to earn a quick buck.


So often I have seen and heard of valuable items being stolen for a couple of hundred pounds worth of scrap.
A typical example would be bearings for preserved railway vehicles, worth a hundred pounds or so each, taken for less than a fiver scrap.