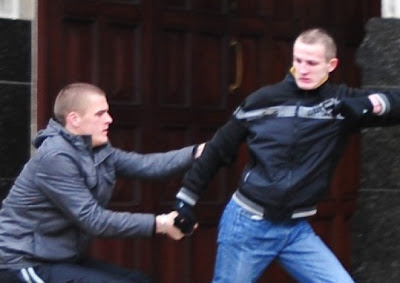 Four robbers broke into a sales room at the Hôtel des Ventes Méditerranée in Marseille on 24 July 2011. In the course of the morning, they made away with the jewels and antiques on view, a few minutes before the sale was due to start.

According to the auction house, 83 pieces of jewellery and 75 antiques and African art objects worth several thousand euros were stolen after the thieves stormed in with hockey sticks. While two of the burglars waited outside on their motorbikes, two entered the sales room, threatened the twenty clients viewing the pieces as well as one of the auctioneers, who was already present for the imminent sale. The suspects made away with the contents of the safe and fled, all in the space of a few minutes.

The incident bears a bizarre resemblance to a robbery that took place in May, also in Marseille. The contents of the safe of the Service Régional des Domaines was also stolen the night before the set of precious jewels was due to be sold. The criminals made away with loot to the value of several hundred thousand euros.

Seeing that the two incidents are very similar and both took place in the southern parts of Marseille, the Banditry Repression Brigade is expected to take a strong interest in the affair.